The Maytag Man ain't got nothing on me!

"Hey babe, I think the washer is leaking", she said to me.

Now I'm not gonna lie.  I did look at it.  I confirmed it was leaking.  She didn't say, "hey babe the washer is leaking will you please fix it".  As far as I'm concerned I'm covered.

What happened next I'll leave up to you.  In my mind she leaps into my arms, covering me with sweet kisses and whispers in my ear, "If you fix it I'll make it worth your while".

So I did what any good responsible husband would do.  I procrastinated a few more days, whined a little bit and spent another day organizing my screwdriver drawer after I couldn't find the one I needed wanted.
Then I popped a beer and headed into the laundry room which by then the duck had moved in to because the water was so plentiful and cheese companies were setting up shop on account of the plentiful mold with which they would cure their expensive cheeses with.

I tore that bitch apart.  The washer, not the wife!

This is actually pretty easy I said to myself and the duck.  The cheese guys were out to lunch.

I removed the cabinet and a bunch of other parts and turned the machine on being careful to plug in the cord only once I was barefoot and ankle deep in water just as the picture in the service manual says.  I'm pretty sure that's what they meant but there was a big, bold line crossing through the picture so some of it may have been blocked out.  Hope I didn't miss anything.

Yep, I had confirmation.  It leaked.  Now to find out where it was leaking from.  Couple minutes later and I could tell it was coming from the main rubber seal which connects the hoosker do's to the hoosker don'ts.

My jaw dropped and my heart sank ( I just reached down into the water and picked it back up).  Even the duck seemed to drop a little lower in the water.

Now in your best "The Christmas Story" narrator voice repeat after me, "The dreaded main seal"

I had heard horror stories of the dreaded main seal.  A good many men had lost all their DIY mojo after failing at replacing a main seal.  Even My Father had failed at the attempt.

The thought crossed my mind to just blow up a raft, grab another beer and tell the old lady that I had installed an indoor pool.
The duck quacked in his excitement.

After a few trips to the internet I had managed to reduce the washer to a pile of parts.  All I had to do was remove the big nut that was under the agitator and separate the porcelain inner basket from the outer plastic basket.

In order to remove the giant nut you need a special tool (go figure) that I didn't own nor was I going to buy so I used a hammer and a screwdriver (which I later learned in the online video is not a good idea) and broke it in half.  Ooops!
Now the internet shows me how easy it is to just slide up the inner basket.  So I grab a hold and pull so hard the duck farted. (my story).
It won't budge.  An hour later it still hasn't budged and the duck is silently shaking his head.
Another trip to the internet tells me to pour boiling water down the shaft to separate the two pieces.
Two pots of boiling water later (duck has jumped on edge of dryer because now the water on the floor is too hot) and voila...it still won't budge.
Back to the internet and this time it says to pull up on the basket while pounding down on the drive block thingamajig.
I grab a hold of the basket, give the duck a nasty look and pull up as hard as I can and whack the drive block and poof the damn thing pops apart.
The duck flaps his wings as if he's clapping and gives a congratulatory quack.
Once removed I can see the dreaded main seal.  A few minutes later it is all apart and the seal is in hand. 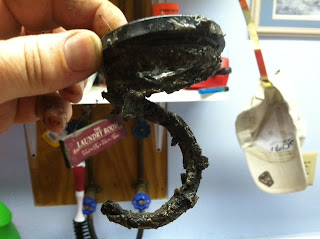 Yeah I'd say it was bad and gross looking. 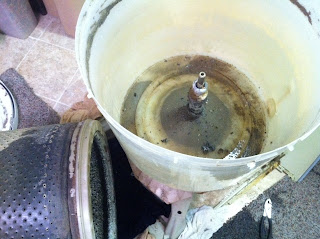 It was very cemented on from all the goop that had accumulated for 20 years. 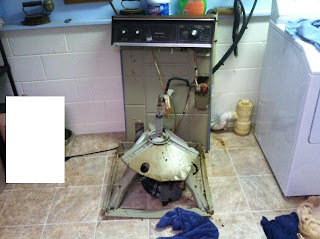 I ordered the parts today.  A new seal, a new drive block and a new nut to replace the one I broke and the grand total came to $42 and change.

Had I called a service tech?  Probably $300 minimum.  Almost not worth it when this washer can be replaced for $500 or less.

I will have the parts tomorrow and everything should re-assemble easily and we she will be washing clothes by Friday morning or late Thursday.

The floor is once again dry and the duck is unhappily living with his chicken friends again.

Speaking of the duck (sort of) I finally named my chickens.  Hubba and Bubba!

I love it.  Names are hard to figure out that's why I never rush it.  It took me several weeks before I named  them.

Stay tuned for more updates at Bushman Acre.  I believe I will be harvesting sweet corn this weekend and also will be finishing the painting and begin the new flower bed.  Sunday is also the day we will have our UK soccer coaches come to live with us for a week.  We will have 2 of them for 3 days and then just one for the remaining days of the week.  Then big party on Saturday!  Woot Woot!
I also spent last weekend up North at the cottage with my parents.  Lots to tell so check back this weekend.

Happy Hump Day!
Posted by Bushman at 8:44 PM
Email ThisBlogThis!Share to TwitterShare to FacebookShare to Pinterest