What a week!  Summer is trying to make a comeback or rather a show.  After a mild summer with cool temps we are now experiencing summer like weather with highs in the upper 80s.  A little late but what are you gonna do?  The garden likes it.  The tomatoes and peppers are coming in like mad now and the rush is on to get everything canned and put up in the pantry. 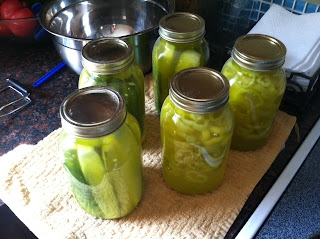 But first I have a few errands to get done.  This morning I am meeting a lady from Northern Michigan here in town.  She is delivering the chimney system that I bought.
After that I am taking Bubba, the rooster, to his new home at my brother in laws house and while I'm there I am filling my truck and trailer full of wood that we cut last year.
Then we are stopping to visit with the wife's parents.  Her Dad has bladder cancer and is going through chemo treatments right now.  They plan on removing his entire bladder in November.  It's pretty hard on him.

Then it will be back home to unload all the wood and the chimney system and then on to the garden.

I started removing the old chimney last night.  I wanted to make sure I measured it right. (good thing because I measured wrong and had to buy an extra piece)  So up on the roof top (click, click, click) I went and removed the chimney cap and started sliding the inner liner out of the chimney system.  It is made up of three different size tubes.  8" in the middle, 10" next and 12" on the outside.  So I began pulling the 8" tube out.  Straight up in the air it went for 20 feet.  It was getting pretty heavy by foot number 15 and I almost couldn't do it.  Eventually I got it out and threw it off the roof.  Then I had a beer! 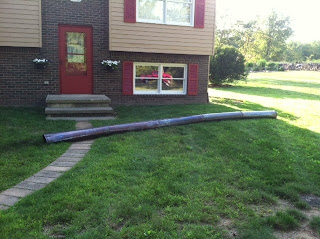 The other day I found a snake in the grass and the dogs did too.  They ended up chasing it into the chicken coop where it was a three way standoff.  It was comical and I have it on video!

Chickens vs Snake vs Dogs


He eventually slithered his way out of the grass and I made sure he had safe passage to the woods.  I was impressed by his tenacity.  Tough little guy.  Hopefully he eats a ton of mosquitoes out there in the woods!

Posted by Bushman at 7:41 AM
Email ThisBlogThis!Share to TwitterShare to FacebookShare to Pinterest