So what are you wearing...Jake from State Farm?

But first.....
A picture of the fully painted wood stove! 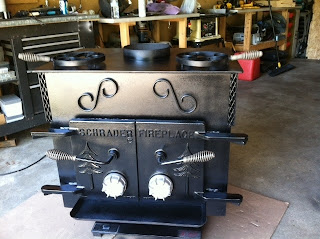 Picking up the chimney system this weekend.  The person from Craigs List accepted my offer.

Tomatoes are coming in strong in the garden.  Sweet corn is all done for the season along with the cucumbers and bush beans.  So far I have made 1 quart and 8 pints of salsa.  6 pints and 3 quarts of pickles and 2 quarts of pickled banana pepper rings.
This weekend I will be shutting down some of the raised planting beds in the garden.  The cuckes, bush beans and onions.  I will remove the vegetation and then staple some cardboard squares on top of the beds.  This will keep the weeds out and any debris that may accumulate over winter.  Next spring I just take off the cardboard and I'm ready to plant.  I will do that with each bed in the entire garden as the plants stop producing.

Tonight I had a visitor for dinner.  Jake. (from state farm)
Kaitlin's new boyfriend.  Check that, she says it's not her boyfriend they are just seeing each other.
I guess they don't say boyfriend and girlfriend anymore.  I'm not sure about all the rules of "seeing" someone but I saw him tonight as he walked up the steps. I saw him as he left the table and I saw him as he left the house.  Hopefully that doesn't qualify.   If he tries kissing me then there's gonna be trouble.

I started calling him Jake from State Farm as soon as I heard his name.  It just sticks.  Especially because she was kinda secretive about him at first.  It's better than what her Dad calls him......Queerbate!

He seems like a nice enough kid.  I'll give him the benefit of the doubt for a little while.  (queerbate from state farm)
Tomorrow I have to help a friend cut up a big tree in their front yard.  The power company cut it down and there chainsaw isn't up to the task.  That's what friends are for!

For the next couple weeks it will be nothing but canning and woodstove/chimney work around here so don't expect too much from me.  Time to start prepping for winter.  I never thought I would ever wish summer would be over.  I think I'd rather be cold than hot.  Can it just be October and November all year?

Later,
-Bushman
Posted by Bushman at 8:25 PM
Email ThisBlogThis!Share to TwitterShare to FacebookShare to Pinterest