The air is crisp this morning.  It feels awesome.  It was still a little dark when I let the dogs out for their morning rituals (running hell bent through the woods in search of any creature still lingering about....and pooping)
Inside the chicken coop (shed) Hubba is crowing his little head off.  I prefer the term roostering to crowing.  Don't crows crow?  Then rooster should rooster.

I scanned the small alfalfa field behind the house.  Empty.  Yesterday morning as I stood on the deck with my coffee in hand a Pony came walking by.  Then a goat.  I gave my coffee a glance thinking how in the hell did someone get in the house and slip something in my cup without me noticing?
I rubbed my eyes and looked again.  Still there.  I think he even looked up at me and winked.

So I set my coffee down, put a shirt on (nobody wants to see a fat, shirtless pony herder), donned my best flip flops (the ones missing a chunk out of the toe area from a dog that shall remain nameless) and headed outside.  If you haven't figured it out yet I wasn't stoned it was the neighbors "pets" and their relentless pursuit of freedom, or alfalfa.  Normally it's the horse that I have to chase down but today it was the other two.

I headed out into the field and did the horse noise thing with my mouth.  You know the one you make with your cheek.  Sorta like a squirrel.  Go ahead try it, no ones looking.  Yep that one!
A couple of those cheeky sounds and My Little Pony comes trotting right up to me.  This will be easy I say to the little guy.  He has no halter or lead so I just grab a handful of grass and entice him a bit.  He follows me easily enough until the goat comes running up and steals the grass from my hand which in turn causes the ponies brakes to lock up.  I reach down for another handful of grass and receive a prompt head butt from the pesky goat.  I give him a stern look and shake my finger at him, reminding him how much I like Greek food!  He doesn't seem to notice.
Out of the field and into the neighbors yard we go.  A loony looking parade if I have ever seen one.  A man in flip flops and sweat pants with a paint stained white t-shirt leading a pony with a handful of grass and being constantly ran into by a pesky goat.  Then the neighbors two dogs notice me and all hell breaks loose.

They are notorious barkers and I begin to think this might be good as it will wake someone up and they can come put away their animals.  Oh I didn't tell you it was 7:30 in the morning?  The dogs are barking non stop and it is echoing off everything.  Damn it's loud.  They go for the goat, nipping at his hooves and he starts jumping around and then the pony starts getting a little nervous and wanting to head back to the field and the dogs are coming awful close to my legs and even though their tails are wagging the hair is bristled up on their necks.  This could go horribly wrong.  I'm thinking I should have just left them in the field.  I can just imagine the neighbor waking up and looking out the window at me kicking his dogs and trying to "steal" his livestock.

I make it to the gate and manage to get the chain off and get it open slightly before the pony decides he doesn't wanna go back to jail and begins to head the other direction.  I chase after him grabbing the only thing available which is his mane and try to pull him back to the gate.  That's when Mr. Horse comes around the corner and sees an open gate.  "Oh shit", I say letting go of the pony and running back to the gate.  He isn't a very big horse but still intimidating at 7 feet tall.  I try and shoo him back into the gate like an old mother Hubbard shooing chickens away from her flowers.  I see the laughter in his eyes and he kicks his head back at me the way horses do.  Kinda like he's saying, " yeah I know what you want but buddy it ain't
happening".

Now the dogs are barking at me and the horse and he is beginning to lift his feet up to kick them and of course I'm in between them.  Those dogs have been here before.  They know what they are doing.
So I say to hell with it.  My coffee is getting cold.  I lower my shoulder into the horse and push him back into the pen.  Just like a footballer pushing the sled during practice.  He gives way and I pull the gate closed a tad and turn my attention to the goat because if he head butts me one more time he isn't gonna make it till sunrise.  I get him in a head lock and drag him toward the gate.  He doesn't wanna go at first but finally does.
Now all that's left is the Pony.  He won't budge.  He is a Pony for Pete's sake.   You think I could man handle him.  Nope he is still a couple hundred pounds.  The dogs still won't shut up and then I notice a lady running from the house.  After 6-7 hours (seemed like it) of fighting her animals she comes out to steal the glory.  She asks me," Were they out?"
I wanted to say'", hell no I was just waking up and I though it was a good idea to come over here and take your horse, Pony and Goat for a walk but then they didn't want to go so I was trying to put them back in the pen but was having a hard time because your dogs were trying to eat me!"
Instead I said,  "yes".

She grabs the Pony and turns him around and leads him into a different holding pen and tells me  "The goat head butts the pony and he doesn't like it so he goes through the fence to get away from him".
"I can appreciate that", I say as I rub my thigh where the goat nailed me.
She looks at me kinda funny.
"Have a great day", I say as I turn and walk away.
I glance behind me every few steps to make sure that pesky goat didn't get out again.

That was how my morning started so of course this morning the first thing I did was to scan the field.
Not getting wrapped up in that dog and pony....and goat and horse... show again!

Momma has been working 12 hours a day and I thought it would be nice if I cleaned the house Friday and did all the laundry for her so she could just rest for the weekend.  She slept in till 10:30 on Saturday.  I think she was tired.  Once she had breakfast and dressed we went to the cider mill.  I just love fresh cider and warm donuts.  They also make wine and hard cider there so we picked up a bottle of each.
My daughter also loves going to the cider mill but she was not around that morning so we went without her.  Then I sent her a text message (just to tease her) that we went to the mill and the cider and donuts were so good.  I told her she had better have her boyfriend (Jake from State Farm) take her before they run out of cider and donuts.  She replied back "They are gonna run out?"  I could just see the fear in her eyes.  I laughed for quite some time.  No, I never told her that they wouldn't run out either.  I'm gonna make it real fun on Mr. Jake from State Farm.  She can't go to the mill and just get cider and donuts.  No she has to get a pumpkin and some candy and well, you get the point.  Better bring some extra cash Jake!

Then momma and I went to look at new furniture.  We found a really nice set but it was out of range on our budget so we will wait for a few months.  No sense in going under on a couch and love seat.
After that it was grocery shopping and home to stack wood.  I'm still stacking that never ending pile.

I went up to the cottage this past weekend to see my folks.  Had a nice visit. I even brought home a little project.  You know I like projects.  This is a 1972 Arctic Cat Lynx.  It is in awesome shape.  I hope to get it running and be able to play around on it this winter. 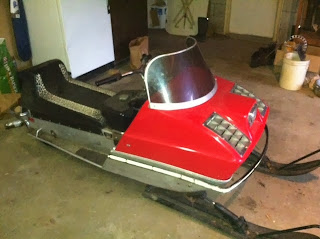 I also finished the install on the stove. 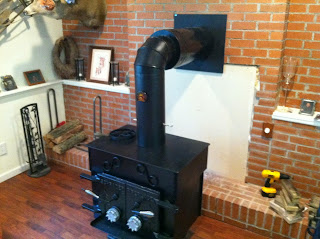 All that's left is brick.

The Sunday I came home from the cottage it was pretty cold and Momma said I need to either light the furnace or build a fire.  So of course I built a fire.  With the new paint job on the stove and the oil film that is on the stovepipe it was pretty smoky in the house.  Once the stove got to 300 degrees the new paint began to burn off, not burn away it just releases a vapor/smoke on the first burn  Kinda like curing the paint onto the stove.  The stove pipe has an oil film on it from the manufacturer so that began to smoke as well.  So for the first hour we had all the doors and windows open in the house to air it out.  Once the smoke cleared I shut the windows.  Then it was really cold in the house.  About an hour later we started to open windows again because it was too hot in the house.  LOL  I'm gonna like this thing.  I only put about 7 pieces of split wood in the stove.  I started it around 4pm and it was still producing heat at 9pm.  Had that been the old fireplace I would have put probably 20 pieces of wood into it to burn that long.

Today I'm going to play outside some more.  Stack more wood, cut some wood up.  Clean up some of the garden.  It's pretty much done now.  I have been making pepper water and I did pick some red jalapenos for making chipoltes but the tomatoes are almost done for. 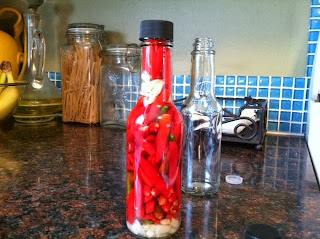 The early blight this year was kept somewhat at bay but the late blight is really taking hold.  Lots of black spots on the tomatoes.  I have plenty of canned tomatoes now and some salsa in the freezer.

That's enough for now.  Long winded am I.

Happy First day of Fall
-Bushman
Posted by Bushman at 8:39 AM
Email ThisBlogThis!Share to TwitterShare to FacebookShare to Pinterest