Spring has sprung, I guess.  You wouldn't really notice it around here too much.  Snow is still covering everything.  My yard is still a foot deep.  Everything is still locked in ice.  It is a treacherous journey just to get to the chicken coop.  The doors have been locked in an ice jam for several days now.
We get a few warm days that melt some snow and it runs downhill toward the coop, puddling around the doors and then at night it re-freezes.
When I am able to get in there, I fill my pockets with eggs.  Luckily I filled the feeder before the doors froze so they have food.  I have been letting them out in the yard in the afternoons so the ducks can play in the puddles next to the garage.  LuLu our female duck has been laying a lot of eggs lately.  Of course Peek and Boo were consistent all winter.  Brave little hens had a rough time but they pulled through.  They gave me an egg a day, 6 days a week almost all winter.  A few glitches when the lights and timers in the coop failed and they did not get their allotted hours of light or when the temps fell below zero but overall, stellar production. 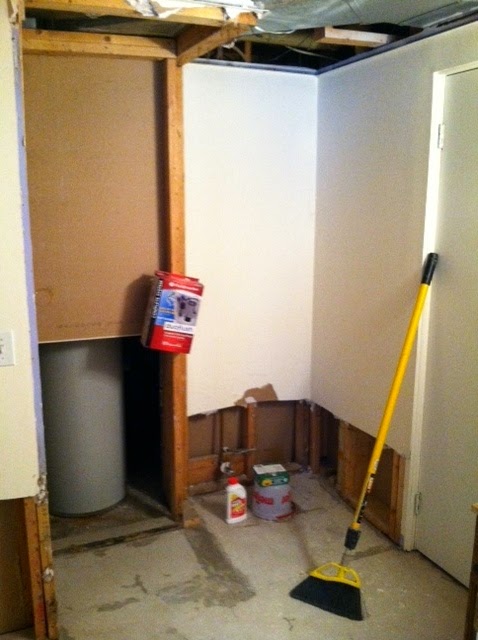 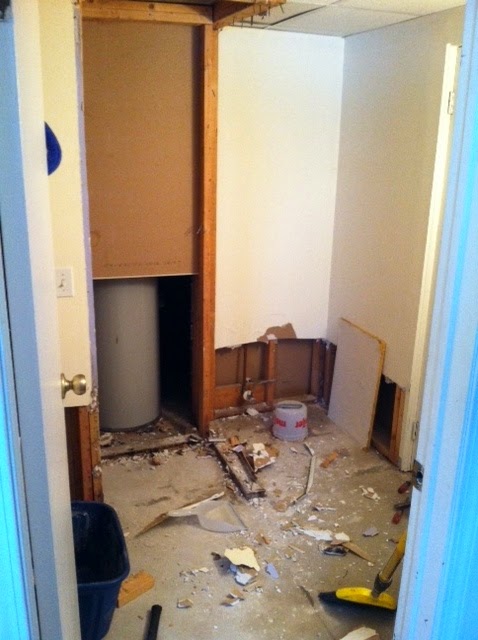 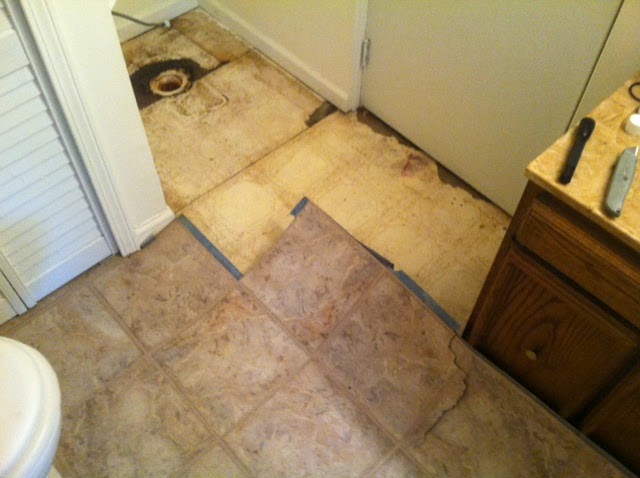 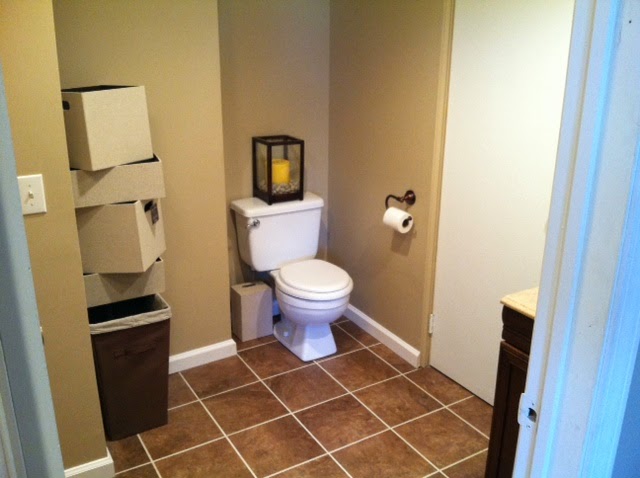 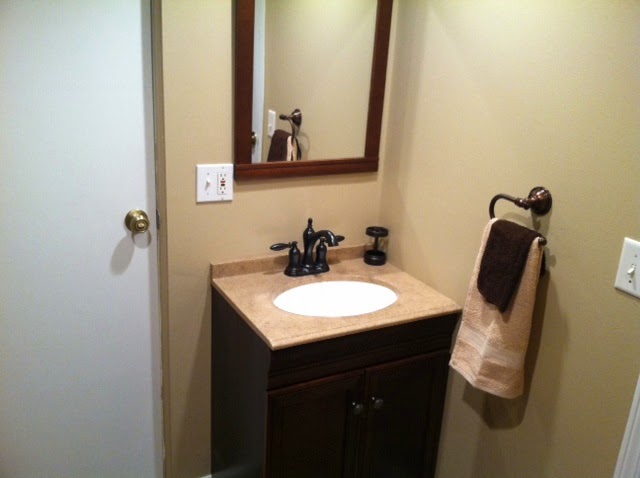 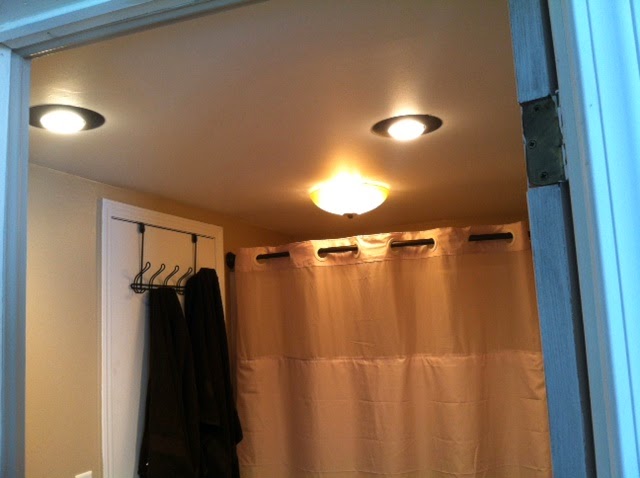 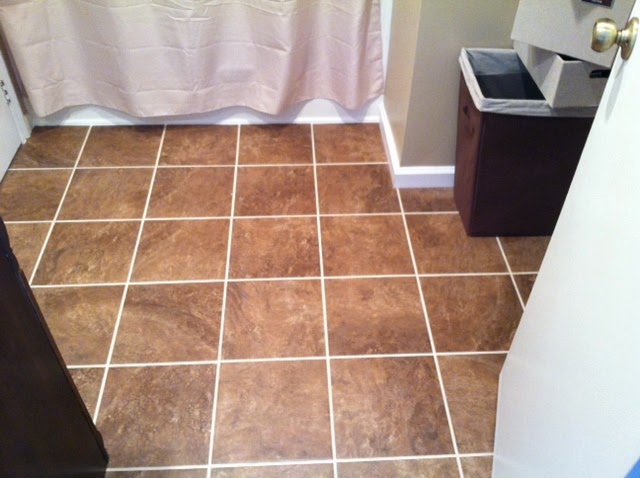 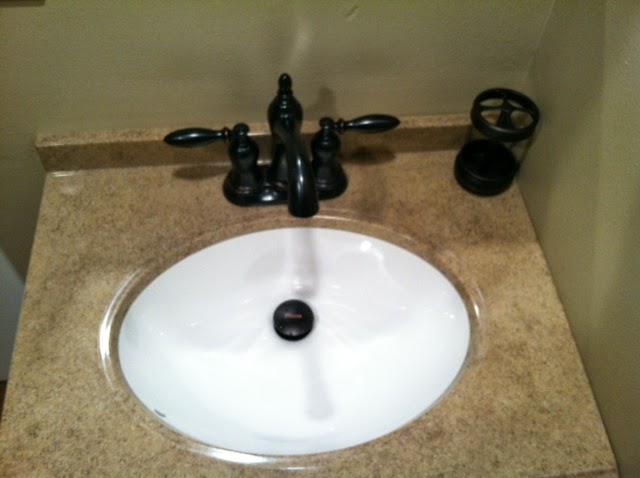 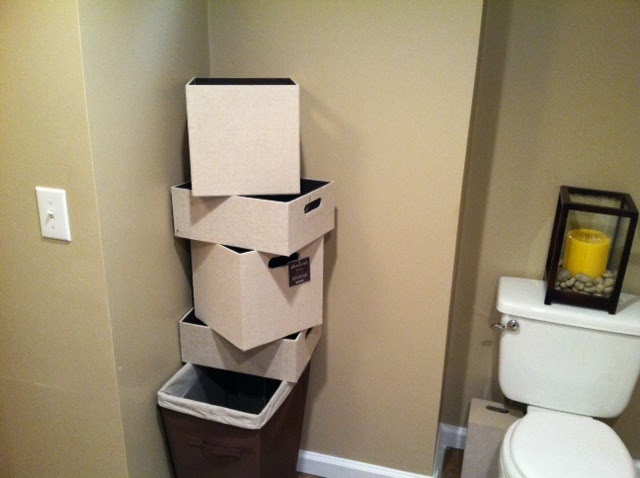 This last pic is where the closet used to be. See pic three.

This is where I will build some curved shelves that will hold these cloth boxes.  The hamper (on the bottom) will slide under the bottom shelf so you won't see any laundry in it.  The other shelves will hold the cloth boxes which will contain certain sundries as well as towels, washcloths etc.  I will also be putting two shelves over the toilet for the skinny cloth boxes which will hold TP and other female products.  It is still K's bathroom for now!  She doesn't head to college until August!

I found this shower curtain that is hookless.  It is really nice.  It has a snap in liner on the inside that can be replaced when needed.  No more gangly looking hooks holding up the curtain.  It also has a sheer mesh type top to let more light in.  You can see the difference in materials if you look at the pic again.  This works out well because the vent/light is right next to it so the shower is well lit.  The old vent did not have a light and it was a plastic job that wasn't real aesthetically pleasing.  This light is a vent as well.  You wouldn't know it by looking at it but there is a gap between the glass dome and the ceiling which pulls the moist air up and in.  Of course the previous homeowner had placed this vent into the drop ceiling panels and never did vent it to the outside so I had to run ductwork and drill a 4" hole through the side of my house and install a louvre style vent cover.  The old vent simply vented up and into the drop ceiling.  NOT good at all!

Two new recessed lights went into the new drywall ceiling.  Positioning of the lights was limited due to the HVAC trunkline running through the ceiling but it works just fine.  I wanted recessed because of the space limitations in the room.  The less stuff sticking into the room the bigger it feels.  It also shines the light down and away from your eyes when standing at the mirror.  Those hollywood style bulbs over mirrors are awful!  Not to mention they collect dust and hairspray like crazy!
Everything is trimmed in the antique bronze finish.  TP holder, towel holder, faucet, curtain rod, back of door towel hooks and even the shower caddy inside the shower.  The curtain rod is one of those bowed out styles that give more room in the shower.

The tile is ceramic 12x12.  The color is 'Mesa Rust'.  The wall color is Valspar 'Mousse Moose' and the trim is plain white.  Grout color is mocha which is surprisingly well matched to the paint.  Lucky on that aspect!

Overall the project turned out pretty good for a small bathroom.  Now it's onto the rest of the house painting.

If I can get the rest of the painting done this weekend then maybe I'll have just enough time to get my indoor greenhouse built and get some seeds started for the garden this year!  It seems so distant when the snow is still piled everywhere but the calendar doesn't lie.  We are 7 weeks away from our average last frost date. 8 weeks away from normal garden planting time!