Is today your last chance at goodbye?

I raced down the driveway, my leather sandals slipping from my feet as I ran towards the road.  Gravel crunched under my toes, sharp and painful.  I shuffled my feet as I ran, trying to keep them from falling off again.  It was only 120 feet away but it seemed like a mile.  I reached the black top of our old country road and skipped across with barely a look to the sides.  My heart was racing not only from the slight sprint but from what lay before my eyes.

Almost directly across the road from my driveway a car was wedged in between two trees.  It's front end was up in the air and only the rear tires remained in contact with the ground.  Smoke and steam filled the air and I could smell the hot engine as I approached.  The first thing I took notice of was all the fluids running out from the engine and puddling on the ground.  The smell of hot oil and antifreeze filled the late summer evening air.

Approaching the passenger side of the vehicle I looked in the shattered window.  A pair of haunted eyes stared back at me.  They were big, round and scared.  Only the slightest bit of whites showed around the pupils.  They were dilated from shock and were black as night.  A quick survey of the car yielded no other passengers but my heart leapt into my throat when I saw an infant's car seat tossed about in the back seat.
Luckily it was empty.

A young girl sat in the driver's seat.  She looked at me with those giant black eyes, through me and beyond.
I don't know if she really saw me.  Her eyes were like ghosts as she blinked slowly, ever so slowly.  She opened her mouth, revealing white teeth painted red with blood and her lips formed a painful grimace as she moaned.  Her head began to roll and and with each passing revolution her eyes caught mine and I could see and feel her terror.  It was then that she began to scream.

She was caught in the car.  The driver's side door was wedged in tight next to a giant cottonwood tree and the passenger side door was crumpled shut.  A passing motorist stopped and as luck would have it he was a two tour Iraq/Afghanistan veteran with medical experience.  He was already in the back seat when I arrived.  He was leaning over the driver's seat, his shirt was in his hands and he was wrapping it tightly around her left leg a few inches above the knee.  She screamed every time he twisted it.  I looked down at her leg and it appeared that a large piece of muscle was missing, hence the tourniquet.  She screamed louder as some of her senses came back to her.

There was no way she was getting out of that car without the jaws of life and I was terrified that it could catch fire.  I sprinted back to the house and grabbed the fire extinguisher.  There was nothing else we could do but try and keep her as calm as possible while we waited for the rescue teams to show.

We noticed her purse laying on the passenger floorboard and I attempted to retrieve it by climbing through the rear passenger door.  Broken glass lay strewn everywhere and as I climbed through the door I could feel the car shift.  I stopped, I was too heavy.  Another smaller motorist assisted and we were able to retrieve her purse.  Inside was her cell phone and an address book and we found her parents numbers and quickly called them.

We waited impatiently as it seemed like an hour passed before the ambulance arrived.  They couldn't do much either except take over for the tourniquet man.  She was beginning to go into all out panic mode as she sat there crushed into her own car.  She flailed her arms about, pounding on the dashboard screaming to be let out because she was dying.  The dash was covered in broken glass and I could see tiny rivulets of blood beginning to form on her hands.

Finally the fire department arrived and they stabilized the car, cut off some steel with the jaws of life and whatever else had her pinned in there and extracted her out through the back seat.  Her cries echoed off the surrounding trees and my heart broke for her.  Soon she was on the stretcher and secured.  I could hear a helicopter in the distance.

I cleared from the scene and retreated back to my side of the road where I joined my wife and neighbor as we watched the helicopter circle the scene and slowly fade off to the north to an empty farm field to make the pick up.  The ambulance, with it's patient, drove up the hill and out of sight.  A short time later we saw and heard the rescue chopper take off for the hospital.

As far as I know she lived through the ordeal.  I do not know if she suffered any internal damage but from the view of the car and the fact that the steering wheel fell out of the car and parts were found sixty feet away there may have been something more serious.

I did not take any picture while this was going on.  I waited for her and her family to leave and as the wrecker moved in to retrieve the car I snapped a few pics.  I also took a short video of the fire truck, which is one of the ones we build at work.  I was proud to see it in action.

It was a week ago today when this took place and I still find myself thinking about that poor girl.  I can still see those haunted eyes staring at me.  I hope she is ok. 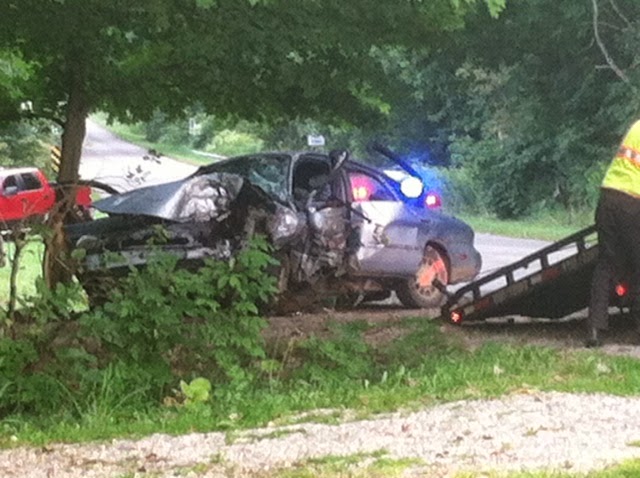 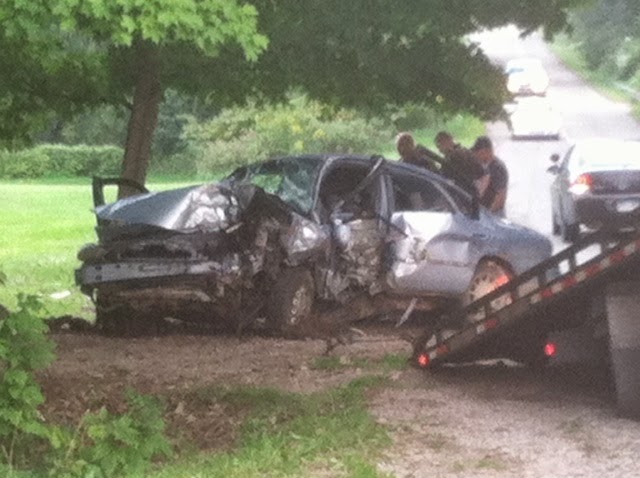 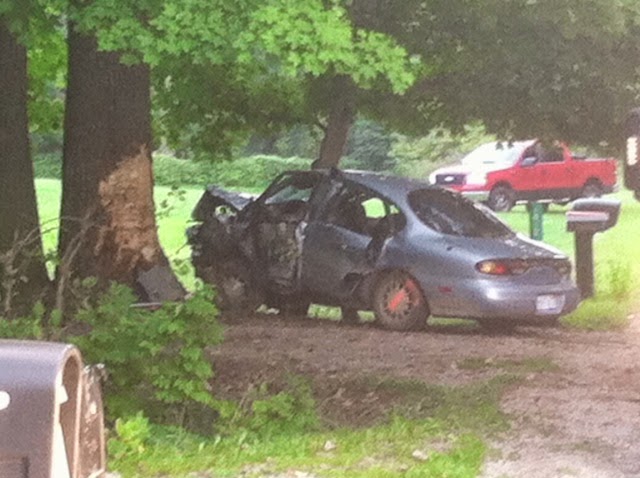 I do not know why she crashed but we do know that her phone was in her purse so she was not texting.  From the tracks in the grass we determined that her car drifted from the southbound lane, crossed the northbound lane and entered the neighbors wide ditch.  The car went straight down the ditch never veering.  There is a split rail fence on one side and mailboxes on the other.  The car never touched either.  The ditch ended at the driveway of the neighbors house and the ground rose slightly upwards where it met the driveway.  This created a ramp.  The car went airborne for about 30 feet.  Jumping both driveways and only stopping when it wedged itself in between the two trees.  In between the two driveways was a lilac bush and it was broken off about 4 feet up where the car sailed over it.  The driver's side front end hit the cottonwood on a slight angle causing the car to slide to the right.  This is probably what saved her life because all of the energy was redirected at that point.  Had she been 3 feet to the left she may have been dead on impact.  Three feet to the right she probably would have squeezed right between the trees and walked away.
If you watch the video you will see the row of mailboxes.  This is almost right where the car went airborne and you can then see how far it is to the tree.

Whatever the case was it doesn't really matter.  Make sure you tell your loved ones how much you really do love them.  It can all be gone in an instant.

-Bushman
Posted by Bushman at 9:24 AM
Email ThisBlogThis!Share to TwitterShare to FacebookShare to Pinterest
Labels: 911, emergency, firetruck, jaws of life, rescue