"I don't know what to do, I've tried everything," he muttered.

The raspy scratch of his voice echoed the exhaustion in his eyes.  The bags under his eyes were dark and swollen.  Sleep had not been a companion for some time.

He turned towards the kitchen, taking three steps he stopped and turned his weary self towards the front window, checking.  Every few steps he would repeat the process.  Always checking, looking and listening.  He could not hold out much longer.

The trickling water from the faucet as he filled his glass was the only sound in the house.  A cold and unwelcome sound that seemed to cut the silence like a band-aid being ripped from the skin.
The faucet shrieked as it was turned off and goose bumps raised upon the neck as the house once again turned back into silence.

As he shuffled his way back towards the front room he kept his eyes locked on the window.

"Did you hear that?"he asked.

The visitor shook his head silently.  He was getting concerned.  It was not like his friend to be so uptight.

"Oh he'll be back, don't you worry.  Only this time I will be ready for him."

"Who?, What?  I don't understand what your talking about", he almost yelled at him.
"Your not making any sense at all and frankly, I'm beginning to get a bit worried."

He looked at his friend with a cold, hardened look.  "You might want to leave, it may get ugly."

As he said those words he reached behind the couch and retrieved an old battered pump action shotgun.

"Whoa, whoa what the hell are you doing with a gun," he stammered.

His eyes welled up with tears and his friend could see the true exhaustion that had overtaken him.
He could not imagine what kind of trouble he was in that he would warrant the use of a gun.

"Let me call someone-the cops?  Who is doing this to you?"

"It's too late, I hear him coming back already."

"Who?  Oh my God what in the hell are you talking about?"

He looked at his friend and whispered," Shhh...get over here and duck down behind the couch with me, it will be over shortly."

Fear began to creep into the visitors face and without hesitation he ducked behind the couch next to his now apparently insane or very troubled friend.

He peered up and over the back of the couch.  His friends eyes were locked on the window, partially blocked by the Christmas tree which was in a terrible state of disarray.

Light strands hung loosely and some were even dragging the floor.  A few ornaments lay scattered on the floor and some were shattered into a thousand tiny pieces.  Tinsel and garland strangled the disheveled tree in tied up knots.

He stared intently at the window behind the tree wondering what was going to happen in the next few moments.

Then he heard it to.  A slight thump.  Then a very soft squeak which sounded as if it came from a very small door hinge.  Another thump.  The noise was coming from down the hallway but his friend's gaze was still drawn to the window behind the awful Christmas tree.

In the next instant all hell broke loose.  The slow thumping down the hall turned into a machine gun rat-a-tat of smaller thumps and a howl pierced the silence of the house unlike nothing he had ever heard.  Through the noise of the howling and thumping he heard the small distinct click of the gun's safety being turned off.  He almost vomited.

From his perspective behind the couch, it all went down in slow motion, just like he saw in the movies sometimes.  It was a cat that came leaping down the hallway, teeth exposed and snarling.  An awful moaning howl came from deep within its belly.  As it reached the edge of the living room it leaped through the air, teeth and claws exposed and he could see the whites of the cat's eyes as it prepared to attack.
It flew over the coffee table, knocking a candle and a potted poinsettia  to the floor.  The pot that held the once festive plant shattered and potting soil spewed from it covering the white rug.

The cat still airborne landed smack dab in the middle of the Christmas tree and proceeded to convulse wildly.  Shaking and biting the tree while thrashing with its legs.  Ornaments flew in every direction and shiny silver tinsel rained down in tatters as it was shredded by the evil feline.

In the next instant the shotgun appeared over top of the couch.  The snarling menace stopped its terror briefly but it was too late.  The gun roared and everything went silent except for the painful ringing in the ears.  The cat exploded in a spew of blood, the tree almost cut in half by the shot slowly fell to the side and the window behind it shattered outward into the night.  Instantly the house began to fill with cold air and snowflakes as the wind now poured in through the blown out window.

And that my friends is how I kept the cat out of the Christmas tree this year!
-Bushman 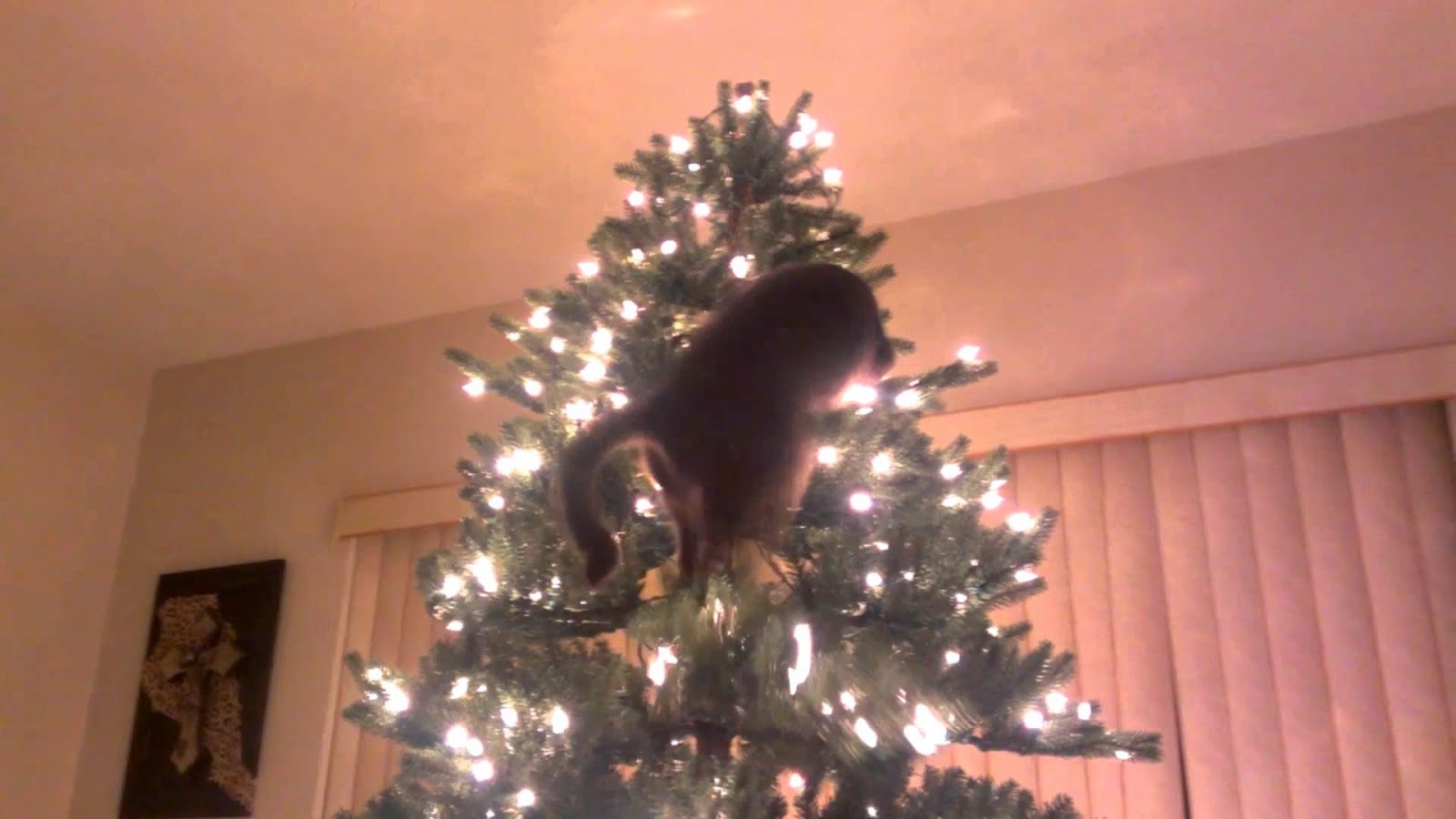