G is for Trees

GIANTS
(An excerpt from my new book)

I headed out into the bush.  I took each step carefully, looking for spiders, snakes or anything picky.  I did not need to be bitten by anything nor did I need to impale my foot on some sharp thorn or stick.  With each step, I scanned the area around me.  I searched for anything edible and for anything drinkable.  I kept a constant vigil out for the sound of water or the smell of it.

Each step took me deeper into the jungle and soon I was out of sight of the beach and shortly after that, out of earshot of the waves.  I waded through thick bushes that reminded me of the garden nursery center back home.  The same ones sold in beautifully painted pots for fifty dollars a pop.  Mary had always wanted to put a bunch of them in the living room.  She wanted a tropical feel to it.  Now that I was surrounded by them, I wouldn't have given you a red cent for them.  They pricked and they tore and they grabbed at the slightest thing.  I was soon covered in scratches and was feeling resentful about my decision to explore the interior of the island.

After pushing through the bulk of the thick brush, the jungle began to change.  No longer was the ground covered in dense vegetation and I could make out the shapes of large tree trunks and eventually it thinned enough to see up into their canopy.

Giant vines hung from the trees, thick as my wrist, and they were covered in a lush green moss that hung down from them like the old Spanish moss that covered the trees down south, back in the states.  I thought that it would make great bedding and made a mental note to gather some at a later time.  The moss covered vines hung from the larger trees in long swooping loops as if some giant had decorated them like you would tinsel, on a Christmas tree.  I wondered how they had grown that way.

Tiny blue and yellow birds seemed to favor the large vines and were perched on them all throughout the trees.  They sat quietly, surveying everything below them.  Every so often one would let out a squawk.  I chuckled, for such pretty birds they sure had an awful call.  They had large black beaks that looked powerful enough to crack the largest nut and long toes on their feet which wrapped completely around the wrist size vines.  Their tail feathers were half again as long as their bodies which made them appear larger than they actually were.

The trees were not only connected by the large vines, but they seemed to be connected by a web of shared root systems.  Each tree appeared to be supported by many single trunks or roots that sloped away from the main trunk and then disappeared into the soil.  Some of these roots went from one tree to another.  There was no start and no end.  A few of the larger ones I could walk in between the roots and pass directly under the tree.

Their bark was smooth and looked more like skin than tree bark.  I ran my hand up and down it, I could hardly feel any inconsistencies and it resembled the feel of leather.  They were perhaps 80 feet tall and as big around as some of the largest oak trees I had ever seen back home.  Under their massive canopy, the forest floor thinned a bit as the smaller vegetation could not compete with these giants.

The air was cool and calm under these trees.  The ocean breezes could not penetrate the thickness of the jungle.  The humidity was slightly higher but not unbearable at all.  I rather enjoyed being here and I paused for a moment to drink some of the coconut water.  I surmised that if this island could support such huge trees as these than there had to be a fresh water source underground.  I just needed to get lucky and find where it was closest to the surface.

I stuffed the bark plug back into the coconut shell and stood up from my perch on one of the flatter tree roots.  I resumed my search and once again, as I distanced myself from the large trees and the interior of the island the jungle began to thicken again and soon I was fighting the thick brush and dense undergrowth.  I cursed the islands habitat and carefully plodded my way through. 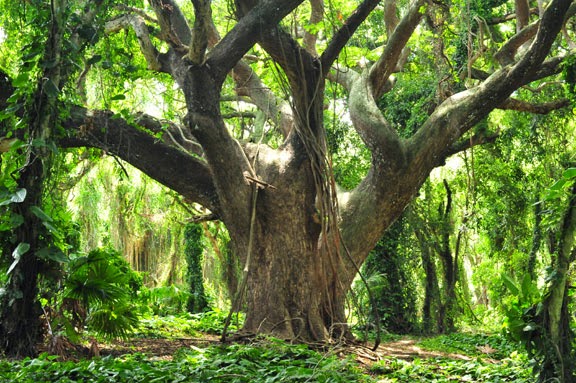