Hello and welcome to the High cost of This Low Living!
Dad and I just returned from our fishing adventure in Northen Ontario, Canada just 6 days ago.
Instead of dropping a few pictures and calling it good I am going to give you the entire gig.  Start to finish with pictures, videos and hopefully a good story.
Stay tuned and enjoy!
-Bushman

The seat was cramped, straight-backed and without any cushion.  All around me, tucked into every available square inch, was a collaboration of items whose purpose, with one glance, was easily identifiable.

I could see outside but just barely.  The small plastic bubble was marred with years of use and everything appeared blurry just like opening your eyes underwater.  In order to see out of the bubble, I had to slouch down in the already uncomfortable seat.  These contraptions were not built for people over six feet tall.  Slouching as far as I could without the seat belt cutting off all of the air which was feeding my already rapidly beating heart I stole a glance out of the window.

The sun was just rising and it glinted off the water’s surface in a million tiny diamonds.  I lowered my sunglasses and stared off into the sunrise.  An island in the distance was serene and tranquil in the cool morning air.  A small cottage sat on its shoreline, the roof only partially visible thanks to the many trees surrounding it.  I wondered if the owner was sitting in his favorite chair watching the sun come up just as I was through my bubble.  A small boat bobbed in the water in front of the cottage.  Its wooden sides were painted blue with a wide white stripe running down the side.  I could just make out the tips of the oar handles poking up over the top of the sides.  I wondered of all the adventures that were made with the tiny craft and found myself yearning to feel the soft, polished handles of the wooden oars. 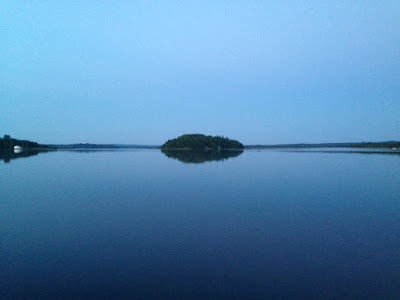 I was startled from my trance as the pilot pushed the ignition button on the console and the turboprop engine popped and sparked its way to life.  The single propeller at the nose of the aircraft began a slow erratic rotation as the engine struggled with the high compression strokes.  Seconds later the engine was running and the prop was spinning freely.  The little bush plane began to pull away from the docks. 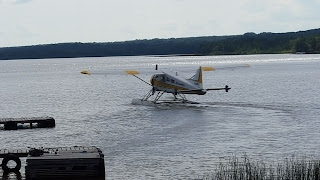 My heart raced as anxiety flooded my body.  We were finally off on our adventure after a year of planning and waiting.  Also, I wasn’t a big fan of flying.  The plane taxied out towards the island much to my delight and I was awarded a closer view. 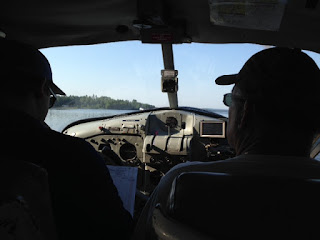 As we came closer the pilot nudged the throttles and the engine roared to life and the plane began to increase in speed.  The pontoons under the fuselage skimmed across the still waters of the lake as he pushed the throttle forward all the way.  The nose rose up into the air and within seconds we were airborne and the cottage was below us and then gone.  Faded into memory.


Posted by Bushman at 9:07 AM
Email ThisBlogThis!Share to TwitterShare to FacebookShare to Pinterest