It was the vibrations that I noticed the most.  I could feel them in my teeth and they reverberated their way through my entire body.  It made me nervous, I wasn't a big fan of flying on jumbo jets let alone single prop bush planes.

I watched the pilot like a hawk, his every move, scrutinized and questioned.  When he reached between his legs for the large plastic travel mug full of coffee the plane lurched slightly and I thought I was a goner right then and there. Casually he took a long sip and leveled the wings.  Which were only askew by a few inches but to me, we might as well have been flying upside down. 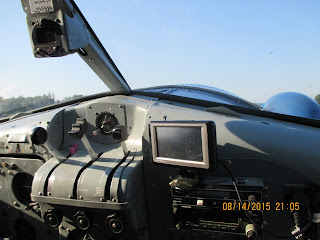 I was amazed at all the levers and knobs and dials the little plane had in it.  Every few moments the pilot would slide a lever a bit to the left and then spin a dial counter clockwise only to spin it clockwise a few seconds later.  A slide of the throttle lever, another sip of coffee and then he checked his messages on his phone.  I was moments away from passing out when I decided to look out the window instead.
What a great choice that was.  The landscape under me was amazing.  Untouched wilderness dotted with lakes, streams, and larger rivers.  The blue sky reflected in every one of them smiling back at me.  As far as the eye could see it was pure and untouched by man.  I marveled at the beauty and was saddened at the same time of mankind’s ultimate loss. 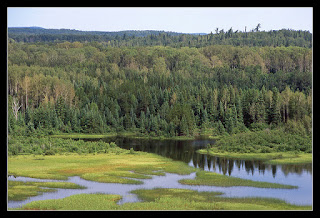 After a brief flight, I would guess no more than 20 minutes I heard the engine change pitch and it brought my attention back to the cockpit.  I watched the pilot make several adjustments and the plane began to descend.  My nerves jittered, but my excitement far outweighed my nervousness now.  We were almost there.  He banked the plane a bit to the left and leveled out and there was our lake spread out in front of us.  What a glorious sight.  I braced myself for a rough landing on the water and was quite surprised when I almost didn’t feel the touchdown at all.

(sorry about the finger)

After touchdown, the plane floated up to the dock and the pilot jumped out and tied us up.  Three men were waiting on the dock, their gear piled neatly, waiting to be loaded after out unload. 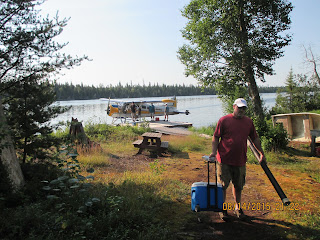 We unloaded our gear while chatting with the other guys who had just finished their week in the bush.  They said fishing was good and they had caught 117 fish.  Once we were fully unloaded we helped them load their gear into the plane and then the pilot showed us around camp.  He explained how everything worked like the generator, the propane fridge and how to change the tanks.  Of course we knew all of this already but he had to make sure.  He was polite, courteous and professional.  Once he knew we were OK he made his way back to the plane and everyone piled in.  He bid us farewell and happy fishing and brought the little engine on the plane back to life and was soon airborne and fading away over the treetops.

We hauled our gear up to the cabin which was only 30 yards away.  It didn't take long to unpack and settle in.  After that we cracked a beer, toasted our adventure and headed back outside. 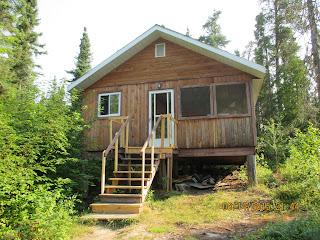 We stood there silently.  Nothing was said, we just listened.  After a year of planning, we had finally made our destination.  It was surreal as it gets.  Smiling I turned to my Dad and gave him a high five and said," Let's go fishing Pops!"

Posted by Bushman at 7:09 AM
Email ThisBlogThis!Share to TwitterShare to FacebookShare to Pinterest