The sun's rays beamed down from above and soon the heat could be felt, rising from the black spongy ground, which was nothing more than layers upon layers of Canadian Spaughaum moss. Accumulated over centuries of life, death and the inevitable process of decay.  Over time, the layers built and the culminated weight of them compressed everything into a soil-like texture.  However, a good stomp on the mossy surface would send vibrations throughout the surrounding area as the ground in the vicinity also moved underneath.

It was these layers of organic materials and the surrounding forests of cedars, spruces, larches and jack pines that filtered the rainwater.  Drops of rain washed through the dense mat of decaying organic material and then leeched into the lake.  It carried with it, the acidic tannins and the dissolved organic carbon in the soil surrounding the lake.  This gave the lake a dark tea-stained color.  Staring into the water column, the maximum depth at which you could see the lake bottom, was no more than a meter and in most cases less.

As if the water wasn't eerie enough, the surrounding shore breathed life to a new scene of scary stories.  The trees that grew along the shoreline lived precariously on the edge of life.  Their balance between upright and toppled all depended on the rains and the winds.  The peat moss banks held little in the way of stability and most of the trees that grew along the shoreline were leaning in and over the water.  Almost all of them were dead.  Their sun-bleached skeletons hovered over the water as if they were peering into the depths, looking for their long lost brethren a tangled mess of branches and roots.  The mere thought of becoming entangled in this gnarled mess, while being drawn into the dark water, would set anyone to shivering. 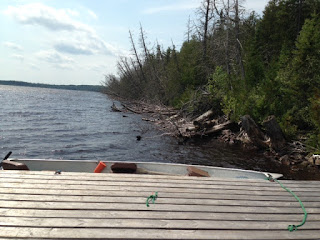 Of course, I didn't notice any of this until later on when I actually had the sense to stop and breathe all of the scenery in.  Right now all we were interested in were the scores of walleye, perch, and pike we had been dreaming about for 53 weeks.

So after our initial tour of the cabin and a celebratory beer we got down to business.

Our first task was to re-assemble all of our poles.  Each one of the ten poles we brought had to be put back together and the fishing line strung through the eyelets and some sort of tackle tied to the end.

What was tied on the end depended on the pole and the species of fish which we were trying to catch. We had heavy poles for pike and on these we tied a short black steel leader with a snap swivel on the end.  We had medium weight rods for walleye and on these we tied a snap swivel which makes it easier to switch between lures and jigs.  We also had an assortment of light and ultra light rods which we tied jig heads to their line, straight up, no swivel.

By the time we had unpacked, assembled our fishing gear, and actually made it out to the dock it was around noon.  It was getting hot and everyone knows that fishing isn't that good in the middle of the day, let alone when it is approaching 85 degrees.  We didn't care.  If all we got out of it was a boat ride, then so be it. 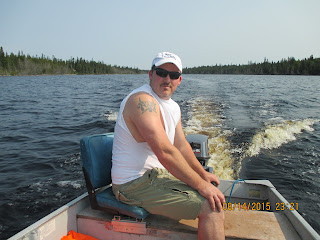 Notice the color of the water in the prop wash?

The outfitter we chose had a collection of fishing maps back at the lodge which held general information about where to catch fish on the lake and depths etc. These maps were made by the people who had fished the lake in years past. Some lake maps held vast amounts of info but ours was not one of them.  There were some tidbits that I gleaned and copied them onto a blank copy of our lake map so we at least had some sort of an idea on where to find fish.  We headed to those spots first.

When we were done fishing for the week I had made a new map and also on the back of the map listed every detail about where we fished, how we fished, the weather, bait, lures, depths and even a bit of topography of the lake bottom.  There were a few spots we found with our depth finder that signified an underwater structure like a shoal, a reef, or a pile of boulders.  These were great spots to fish.  I have no idea what was under the water but I knew the fish liked it. 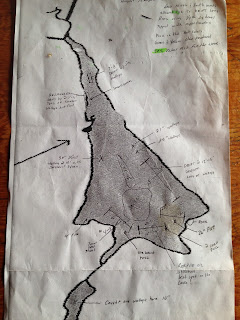 We fished that afternoon for several hours and we caught more fish than we expected.  We knew dinner was going to be great anyways!

We returned to the cabin around 4 PM, had a snack and grabbed some beer and ice for the cooler and we were back on the water by around 5 PM.  We fished until dark and caught 15 more fish.
My journal didn't really start until Sunday, but my Saturday evening entry reads as follows:

For dinner that night we had fried potatoes and walleye. 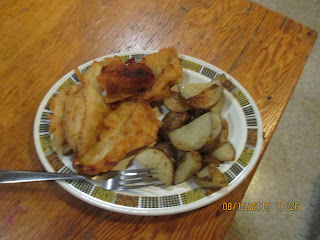 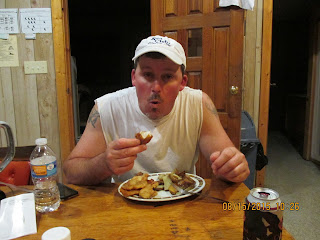 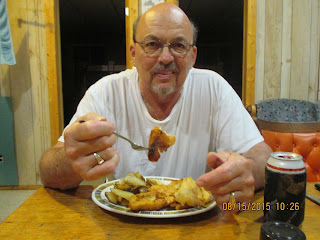 After a long day of travel and fishing, we retired for the night.  I slept like a rock while Pops was awake all night anticipating an attack from a bear that would be trying to get into the cabin to get at the fish guts in the cleaning bucket.

Stay tuned for what happens the next day.  Would it be bad weather?  Beer fest?  Arts and Crafts day?  Or maybe all three...

Posted by Bushman at 8:26 AM
Email ThisBlogThis!Share to TwitterShare to FacebookShare to Pinterest