The thick fog lay heavy upon the water, visibility was down to within a few yards.  The air was impressively still and each breath seemed as if it were coated in syrup.  The weighted air pressing down upon my skin felt like a heavy, wet wool coat and I retreated back into the cabin as drops of rain began to patter atop my head. 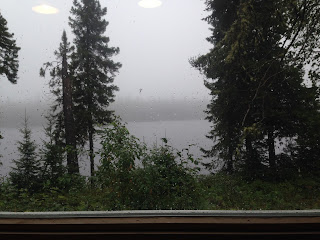 Inside the cabin, the light was dim at best.  I shuddered, trying to rid myself of the cold dampness I had carried in from outside.  I could just make out the stove and the percolating coffee pot that rested on its chipped porcelain top.  The faint smell of last night’s dinner still remained in the air around the stove, fried fish and skillet potatoes.  I felt for the box of matches on the shelf next to the sink.

Striking the little blue head first against the smooth side of the box and then the correct side the match flared to life, a flicker of warmth and hope on this abysmal morning.  Quickly I twisted the plastic dial on the front of the stove and lowered the match under the coffee pot.  Whoompf!  The burner ignited and I shuffled my way back to the confines of my warm sleeping bag to await the song of the percolator and the start of the day.

After a few days of sunny warm weather, a front moved in, bringing with it clouds, moisture and heavy fog.  Sometimes the wind would blow and others it would be dead still.  Not a ripple on the lake.  We fished anyway.  Sometimes we would wait out a squall and other times we would be trapped in it out on the lake.  Ever thankful for our rain gear, which allowed us to stay out in the inclement weather, we fished on.

This particular morning was the morning we chose to take a little adventure to the lake directly to our North.  This lake was known as Oswald Lake.  On the far shore of Oswald Lake, there existed another cabin, owned by the same outfitter as the one in which we resided.  The cabin was currently not in use by another fishing party and was sitting dormant, waiting for its next visitors.

Our plan was to take our boat to the southern end of our lake, where another dock was located and park the boat there.  A 15-minute walk through the dense woods would bring us to a dock located on Oswald Lake.  The outfitter keeps a boat at that dock so folks from our lake can also fish the other lake. 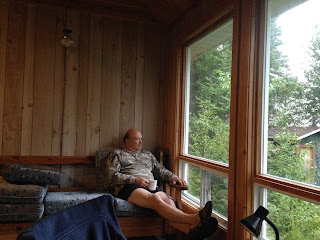 Of course, the weather just had to be bad on this particular morning so we had coffee, breakfast and a bit of a wait before we decided, to hell with it, we’re going anyways.  So we packed a lunch, broke down our gear for transport through the woods and picked a few of our favorite jigs and lures, along with some fresh night crawlers and piled into the wet boat.

A few moments later we arrived at the southern dock and began our offload and after a bit of a perilous jump off the dock we entered the thick and now soaking wet, woods.

I had planned on videoing more of the journey through the woods but my phone/camera decided it didn’t want to co-operate. 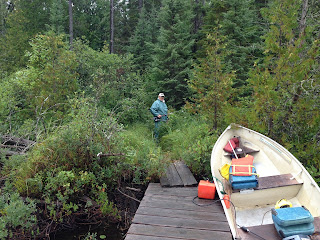 After a soaking wet hike through the woods (glad we had our rain gear on) we arrived at the dock on Oswald Lake.  Our first obstacle was to get the boat off of the dock and into the water.  The second was getting it out of the extremely shallow water so it would float with us in it.  The depth next to the dock was about ankle deep.  For this, I had to remove my socks and shoes (which were soaked through and through by our hike through the rainforest) and tug the boat, with Pops in it, to deeper water.

I motored out through the shallows into deeper water and cranked up the motor to full speed and that’s when I noticed the “chug” in the motor.  I didn’t think it was too big of a deal, at first, but after we tried a few spots here and there without much success, we left one side of the lake, to cross it in its entirety, and try a spot on the other side.  During out ride, the motor began to act up a bit more and as luck would have it the wind and waves began to rise quickly.

Once we reached the opposite shore we set up to drift alongside the shore  but the wind and waves were getting worse by the minute and before long the waves were rolling over the back of the boat and it wouldn’t be too long before it was full and we were sunk.
I hollered at my Dad that I was ‘’ most uncomfortable “ with this situation and we agreed to head for the empty cabin and at least wait out the storm or swap boats and motors for either a larger boat or a better motor.

Arriving at the empty cabin we tied the boat up and stepped on land.  I was quite relieved to be off the dangerous water.  We took a few minutes to check out the cabin and its surroundings and we both wholeheartedly agreed that our cabin was way better.  There are no people around in this area.  There are no roads or trails which one could follow to access this cabin, so everything is left unlocked.

I went around to the back of the cabin and turned on the propane tank so we could boil water to make our soup.  We cooked lunch and filled our bellies with hot noodles and broth.  Once finished I turned the gas back off, washed our spoons and placed them back in the drawer, and we left the cabin.  On our way back to the boat, I grabbed a spare motor off the shore and swapped it with the faulty one on our boat.

As we headed back into the middle of the lake we decided it was just too nasty to fish, especially on an unfamiliar lake.  Our ride back to the other dock was uneventful.  The new motor ran fine and we were headed into the wind, so it was a better ride.  Other than the big splashes the boat made crashing over the waves we made it back to the other dock without issue.

Safely docking the boat we made our way back through the jungle, to our boat, and safely back to our cabin.  We were both wet, cold and tired.  Not much happened the rest of the day.  The chill had settled into the cabin so I lit a fire in the little wood stove and soon it was warm and toasty inside.
Below are some photos of the other cabin.

Overall shot of the cabin 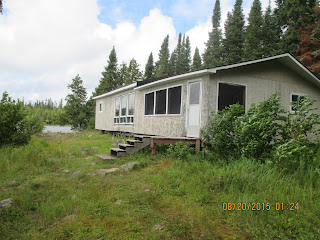 Inside the screened in porch 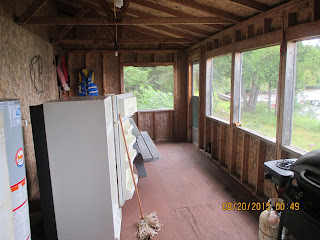 Inside the main room 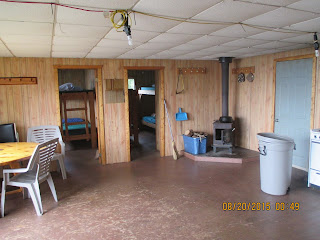 The view from shore.  The cabin was situated at the end of a long protected peninsula so the waves were not bad here at all. 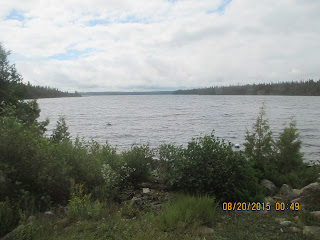 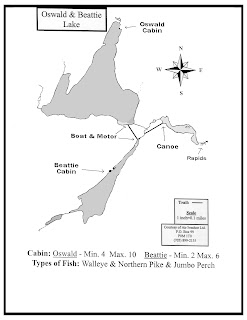 Even though our adventure didn’t turn out the way we had hoped it was still exciting and will always be remembered.

Stay tuned for the last episode coming up next week and then some huge news the week after that!


Ooops!  I forgot to add the fish counts and journal entries.

Tuesday- 15 fish in AM, 21 fish in the PM  Low pressure moving in rain and winds out of the Northeast.  Rainy, cold, stiff winds out of the NE.  Fish were still biting but had to do a lot of running around to get them.  Went south through channel to the lagoon.  6' deep caught one walleye.

Posted by Bushman at 10:52 AM
Email ThisBlogThis!Share to TwitterShare to FacebookShare to Pinterest