E is for Old Hands

So today we make our second venture into the land of vowels.

"Pat, If you don't give me an E I'll rip your head off and shove it up your cloaca."

"Um, Bushman?  That was two days ago and that was Al Penwasser's  post."


Have I ever told you the story of my first Cuban cigar?

A long time ago, in a country far, far away lived a small man by the name of Domingo Ricardo Javier Chavez Luiso Guiterrez Hernandez.

He was a lonely man (probably because no one wanted to say his name) and he spent his days in solitude beneath the shade of a giant wild olive tree.  The tree shaded him through all hours of the day as the sun traveled through the sky, deep in the Mexican peninsula of Quintana Roo.

He had no family and his sole possession was rumored to be a magical cigar-rolling machine.  Many men had come to try and steal away his magical roller for they had heard it was the best roller in all of the land.  They looked high and low and searched every crevice around the old olive tree but they had never found it.

So the man grew old and gray and his brown skin turned even darker in the Mexican sun as the wild olive tree began to wither and die in its old age, taking its life-giving shade with it.

So the soldiers traveled deep into the countryside in search of the old man and his roller but like everyone else who had tried, they found nothing but the old man and his withered skin.  They did not want to return empty handed so they scooped up the old man and placed him on the back of a bony old burro and cinched him to it.

For three days and nights, they rode non-stop until they reached the gates of the emperor's mighty kingdom.  Once inside they regaled the story of the magical but missing roller.  The emperor was furious and demanded that the old man reveal the location of the roller.

The old man sighed and with sad eyes he looked at the emperor and held out his hands, palms up. 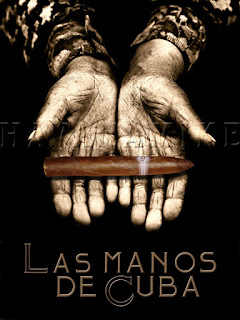 The emperor's face grew red under his brown skin and spittle flew from his lips as he ordered his guards to lock the old man in the dungeon.

"Lock him up and give him a sack of the finest Cuban leaf we have.  If he does not produce the roller and roll me the greatest cigar ever by morning, he shall lose his life."

The guards did as instructed and locked the old man up in a tiny cell with no windows and only one small door which was blocked with a heavy iron bar.

The old man sat on a rickety stool inside the cell and opened the sack of tobacco leaf.  He inhaled deep and smiled at the smell.  It brought back many memories of years gone by and as he closed his eyes his hands began to caress the leaves.

He felt each one with his delicate fingertips, sensing the shape and the size.  His fingers and hands knew without looking the quality of each leaf and before long the magic machine was beginning to work.  Long brown fingers twisted and tucked and seamlessly rolled the leaves into a beautiful cigar.

When the night began to turn back into day and when the candle was down to its last few moments of life, it flickered and cast a dim light upon the floor of the dingy cell.

Laid out in a row were 12 perfectly rolled cigars.  The finest in the land.  Next to them laid the old man, his head cradled on his arm, knees tucked tight into his chest.  The light flickered once again and the candle and the old man took their last breaths.  Darkness overtook the cell.

"It must be in here somewhere," he raged.
"Tear this place apart until you find that machine."

Although they tore the tiny cell apart and searched every nook and cranny they never did find the machine.  It was only when he looked at the body on the floor did he notice the tobacco leaf wrapped inside the old man's fist.  He stooped down and looked closer.
What he discovered was the magical machine.
It was the old man's hands all along.

The emperor gave the old man a mighty funeral and he took three of the cigars that the old man had rolled and placed them in a temple near the coast where the temperature and the humidity were just right and there they lived for many years until one day they were discovered by three men.

I just happened to be one of those men!  Along with my Pops and friend from across the Ocean by the name of Dave! 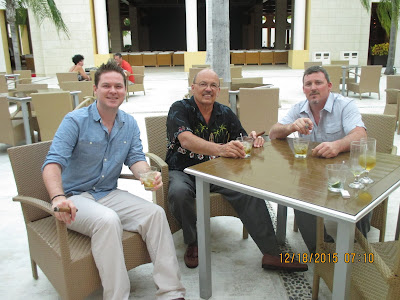 Well...maybe that whole story is a little bit skewed but I will say that was the best cigar I have ever had.

On our vacation to Mexico last winter, we visited Quintana Roo which is the Mexican state where Cancun is located.  The resort featured a cigar shop with the most premium of brands along with the fabled Cuban cigar which is illegal in the USA.

While this story has little to do with the letter E it is just what popped into my head when I thought about using the name of the resort we stayed at which is...

(heaven only knows where my mind is headed sometimes)