Uhhhh.....
Not much happening here.  My six day hiatus from posting has left me with so much to blog about, so much to blog about, "you didn't have to say it twice", I didn't it's the echo in my otherwise empty head!
They "gave" us a furlough at work.  More of a force feeding than a gift I would presume, however, other than losing out on a paycheck and trying to cram that weeks bills into this weeks bills and the week after .......
Never mind.  I am glad to have some time off.  I was getting a bit aggravated at work anyways.  They pay me to babysit but camoflauge it with a word called "leader".  So essentially I get to deal with everyones crap, cover for everyones absence, and deal with whiny, sissy old men and lazy middle aged men and then try not to let it bother me because I get paid to do that.  As long as I do it the way they want me to.  With kid gloves and friendly expressions and not with words like ,"your nothing but a crotchety old fart anyways".  Seriously.
My Dad taught me that when you went to work you did your best at whatever task you were assingned.  You gave it your all for the good of the company and the good of the people you worked with and the community as well as doing the best for your family.  Work was not just a way to survive but to make the world better by just a little bit at a time.
The older I get the harder it is to practice these principles.
I'll admit I get sucked into the HoHum of everyday life and the days just bleed by like a leaky old faucet that constantly drips into the same spot.  The spot never floods but stays damp and before you know it there is some mold growing and then one day you wake up and say " Hey" where is the bleach and a wrench.
I get stuck under that faucet from time to time.  This furlough could be my bleach.  Just a little chance to let my mind wander from the everday, and the ordinary.  So I would I guess it's safe to say the glass is half full.
It would be fuller but I just took a big swig!!!!!!

So I started the day off yesterday with a big cup of coffee and a goose scouting expedition.  I checked some swale holes on one of the farms we hunt and unfortunatley it was dried up so no waterfowling there.
I returned home and began to put vinyl siding on my smoker.  I made it through three sides and started to feel yucky so I went in the house, fluffed some pillows on the couch and read about a hundred pages or so.

I feel better today.  Of course I have some pictures.  I was looking at them this morning when I downloaded them and noticed Remmi's head peaking around the smoker when I took a picture.  Kinda cute!! 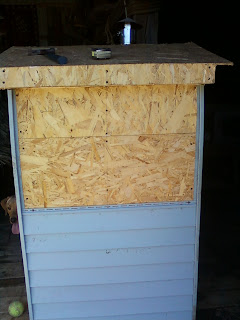 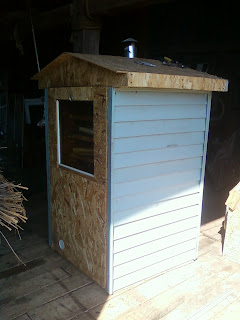 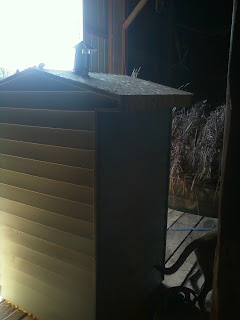 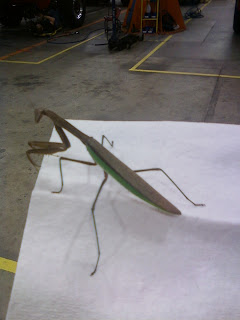 Big mantis we found at work.  Someone threw her in the trash so I dug her out and took her outside. 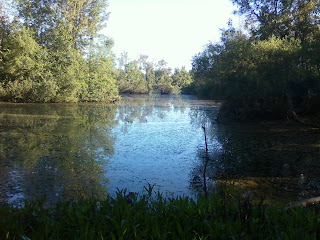 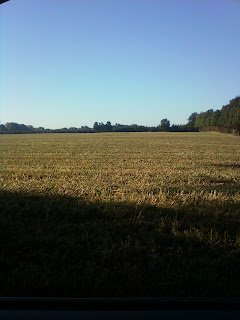 One of the ponds we hunt.  This a shot of the little cuts on the back side of the pond.  If you go straight out you will hit the larger body of water.  Ducks love it!!  If you zoom in on the other you will see some geese out in the field.  Ok until later.  We have soccer and a wedding party today.
Posted by Bushman at 7:40 AM
Email ThisBlogThis!Share to TwitterShare to FacebookShare to Pinterest