Christmas was nice this year.  We had ours on the 24th and I must say I was the one that was acting like the little kid running around this year.  The kids are getting older and there is no rush anymore to rip open presents.  In fact one little princess we had to threaten just to get her out of bed.  I won't name names but it wasn't Joe, Angel or me!!

Perhaps I had one too many pots of coffee or maybe my subconscious knew what lay in store for me that morning but I must confess it was truly an excitable event.

The presents were exchanged and we opened them, all very happy.  I was receiving tortuous hints from the family for days such as I need to make a payment on your gift and it is a really cool collection of gifts and you are really gonna like it.  Now mind you I had made a comment about a new mixer and those things (the good ones) are around $300.  So I'm sorta thinking that line of culinary equipment.  I had pointed out a new set of kitchen utensils that all matched and were quite nice.  As well as a new set of pots and pans, the ones endorsed by Rachel or Paula.  So that was where my mindset was.  That is a collection of gifts and also expensive enough to make payments on and they are really neat.  What I was about to receive was mind blowing and the first time I have been caught off guard at Christmas.   Yeahhhhh Meeeee!!! 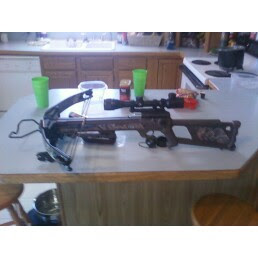 OMG!!!
Yeah I know awesome huh?
I won't go into details but you know when Ralphie from The Christmas Story runs out side to shoot his Red Ryder BB gun?  That was me.
I can't describe how totally surprised I was and I am flattered that my family would do something like that for me.  Amazing morning!!
After our morning festivities we headed to Grandma and Grandpa's for Dinner.
Spiral cut ham, cheesy potatoes, green bean casserole, etc, etc...
Yummy. From there the kids went to their Dad's house so they could celebrate Christmas on the 25th with them. (we alternate all our holidays so we will have them the 25th next year)
So the in laws came to our house on the 25th and I cooked.
I had a smoked turkey breast, my cheddar bacon potato mash and of course green bean casserole.  Twice in a row doesn't bother me a bit.  For desert a banana split ice cream cake.
After dinner they talked us into going to the casino with them.  Well talked me into it.  Angel was putting her coat on before the O in casino was even pronounced.  (Little gambling addict)  I do not like casinos and I usually get mad when I lose money.  This time the in laws gave each of us $140 to donate to the Indians.  So I didn't mind too much.
It is only 20 minutes away from our house so the ride was quick.  We all split up and I sort of just walked around at first.  I finally found a slot to sit at (where some old lady wasn't huffing on a cigarette and blowing smoke in my face) and dropped a $20 into a machine that I didn't know how to play, didn't know what it cost every time I hit the button but it had 200 pay lines and it ate $20 bills like me on a hunk of venison jerky.  I just blindly pushed buttons until I realized (no, no big winning story ahead) I was up to $30.  I should have cashed out and sat in the truck.  Unfortunately you can't do that at the casino.  I think there is a big chief Indian watching and if you cash out too soon you get a tomahawk in the back of the head.  So the thirty gradually turned back into a $20 then $15 and then $5 and soon I was walking again.  I decided I wouldn't even gamble and at the end of the night I would just give the money back. (minus a few beers that is) so I headed to the little sports bar and watched either a re-run of the Michigan-Michigan State Hockey game at the Big House or a live event.  Not sure but the Wolverines sure knocked the puck out of the Spartans.  I actually attended the first "Cold War" in East Lansing quite a few years ago.  It was in the football stadium and we tailgated beforehand in 19 degree weather and a stiff wind.  It was a blast!!
Anyways back to the smokino.  (That's my new word for it)  I sat by my lonesome watching hockey and drinking beer and was quite comfortable.  I must have been by a air return or something because the smoke was decidedly less at my little table.  Well the game finished and I went looking for my wife who, go figure, was on her last $20.  I was still equipped with $100 and some change.  She didn't like that very much and proceeded to try and pry it out of my pockets with her forlorn, sexy eyes and whispered good tidings.  Had I better hearing she may have got my whole wallet right there.  LOL
So I drug her over to a slot machine and  watched as it ate yet another of my $20s.  Then a poker machine was hungry so I fed it a $20 and by that time I was ready to shoot machines in general.  I said to her let's go shoot craps.  At least it's interactive money losing.   After a brief explanation of the basics she was rolling dice like a.......we'll just leave it a rolling dice.  We had fun and I gave her my money and held her purse and coat.  To me that was fun.  Watching her have fun.  I never even touched the dice.  At one point she was up by probably $50-$60 bucks.  It was a $5 minimum bet so it could have went a lot quicker.  She played for over an hour on the first $20.  Then a smoker showed up and started spewing smoke at us and it was either breathe or gamble and we chose the first.  So we had fun and I managed to keep a little money in my pocket.  A very fun and eventful holiday weekend.  I have all next week off and will be hunting, maybe fishing, making sausage and jerky and maybe if I'm lucky cuddling with my wife now and again.  In the end isn't that what life is all about?  Cuddling!!
(There was one machine I had to take a picture of.  I think chickens are cool) 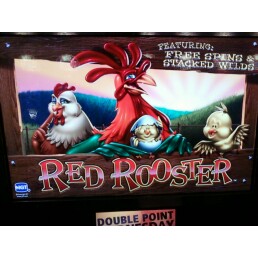 Posted by Bushman at 9:20 AM
Email ThisBlogThis!Share to TwitterShare to FacebookShare to Pinterest