Sunday Salutations and the Seasonal Death of My Beer!

A friend stopped by for coffee yesterday.  It was nice to see him.  We used to hang out a lot.  Of course that was back in my heavy drinking days and it seems as though that was the connective tissue that bound us together.  A year long sabbatical from any sort of alcohol has allowed those collagens to break down and the friendship sort of just fizzled.  Unfortunate yes but shit happens right?
I shot him a text the other day and he said he'd like to come by so he did.  It was a short visit but pleasant none the less.  Turns out he just bought a new lawn tractor from a guy who badly needed some cash  (not too hard to find around these parts) and told me if I wanted I could use his older mower for the new house.
I jumped at the chance.  All I have is a 22 inch push mower and that doesn't bode well for me and an acre of lawn.  Not to mention the mower is about ten years old.  Anyways I was pretty happy that our roots had run deep enough that he still thought of me when it came to the mower.  I told him we'll get together for a beer soon.  My sabbatical has been over nearly a year now.  I'll let you surmise your own reasons.

Speaking of beer, our local grocery seems to not be carrying my beer anymore.  So I was forced into an alternative.  I purchased a box of Sierra Nevada Glissade.  It is a golden bock with a sprig of European hops.  Not bad.  Extremely mellow without the wicked bitterness of too much hops.  That seems to be the big thing these days.  Over hopped beer.  Some of that stuff will downright sizzle the hair off your tongue.
I tried this stuff called Diabolical over the winter.  It was an IPA and holy moley.  Getting off the subject here.  I ventured a trip to Walmart and you all know of my infatuation with Walmart.  I just had to check and see if they were still carrying the 1888 Bock.  I found four 6 packs.  Problem was they were refrigerated.  With the temps slowly coming up the only place to store them was actually in the fridge.  No room!  So I had to let them sit.
Perhaps I could write the Leinenkugels Brewery  in Chippewa Falls Wisconsin and beg them too keep brewing this particular beer.  Couldn't hurt.  Seems as though it's a January through March brew time so I may have to wait.

Enough of beer (for now).  I also took down all the fence panels  I had around the garden.  Hauled them into the shop and made any necessary repairs.  They will also be travelling with me to new adventures.  I put too much time and effort in building them to leave them here.

Picked up a couple movies from the rental place.  Momma rented "ARN" which was a Knights Templar, crusades, love story with subtitles in 3 languages and 3 hours long.  Yuck.  She also picked up "Due Date" which was pretty funny.  I told her we needed to go to bed early cuz it would take me about 35 minutes to fall asleep. (have to watch the movie to understand that one)  I picked out "Frozen" supposedly a very scary flick and last but not least "Jack Ass 3" which momma will not watch with me.  The latter 2 have not been viewed yet.

And so ends my weekend.  Today being Sunday will be spent doing nothing more than grocery shopping, watching the last 2 movies and ...............any suggestions?

Oh and I almost forgot while I was at Walmart I met this nice lady..man..thing!! 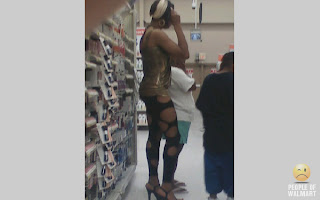 Posted by Bushman at 8:23 AM
Email ThisBlogThis!Share to TwitterShare to FacebookShare to Pinterest