OK I have a question for you.  Two questions actually.  Both disturbing but then again so am I but when a guys got something on his mind he has got to roll with it or it drives him nuts.  What did I ever do without google.  So I'm gonna ask these questions and then maybe tomorrow I will google the answers and find out if my dear readers don't answer it for me.  That would be Bruce and Larry.  At least they are the only people who actually comment anymore.

Question # 1--  Why don't you ever see white dog poop anymore?
When I was a kid (30 yrs ago) I used to see that crap laying everywhere.  Even then I wondered why it was white.  I remember an old story about white dog poo.  There was a girl who lived across the street from us back when I was in about 5th grade or so.  Her name was Angie W. (I won't disclose last names because somewhere, someone else is probably disclosing mine)   Anyways, Angie W. came over looking for my sister.  She knocked on the door and my step mom opened the door and lo and behold there was Angie W. chewing,  yes chewing , on a white chunk of dog turd.  I don't know why.  I don't know what it tasted like but I can fathom that if you mixed lips and assholes (hot dogs) and chalk and then let it rot and sunbake it for 30 days you would have your answer.
That story has stuck with me ever since then.
Angie W. and the white dog turd by JW Bushman.  A story that will move you to tears and probably vomit.  Yeah your right probably shouldn't try and write that one.
So in your spare time think about it.  Go out in your yard and see if you can find a white dog turd.  If you do I would love a picture.  Just e-mail me at bushmanjeffrey@yahoo.com.  I need something to pair with my Walmart photos.  You know what?  I bet somewhere in the recess' of this stupid computer I have a picture of Angie W. shopping at Walmart.  Maybe looking for a pooper scooper?  By now she's old enough to possibly have some back problems and it would be difficult for her to bend over and pick them up.  A pooper scooper from Walmart it is.  Done!

Question #2
What in the Sam hell are boogers made of?
I know this is gross but seriously can something that huge, slimy and chunky actually inhabit your nostrils?
From time to time I do a little nose spelunking and today I came across a pot of gold in the world of...well you get the point.  I stared at it for a good while.  I didn' see any dirt.  I didn't see any firetrucks. (They say whatever stuff you work around always ends up your nose because you breathe it)  It certainly wasn't a white dog turd.  More like an alien placenta!  (I've only had one and a half beers at this point)
So you tell me.  What a crazy thing, boogers.  Also to the guy at work who thinks it's funny to wipe boogers all over the wall and in the toilet area.....FUCK YOU!!!!  Disgusting trash bitch!  We always have visitors at work.  Fire companies from all over the world tour our plant and check our stuff out.  Apparently even our boogers.  Enough about boogers.  Well one more thing.  Say boogers.  Say it again.  If you say it one more time you will be smiling.  It's a kid word and kid word make you smile.  Sort of like stinky doo doo head.

Last but not least it looks like the bank is going to pay for the new septic.  Nothing is set in stone but they are pulling permits so that tells me something.  Until next time my friends, keep smiling and keep it Simple 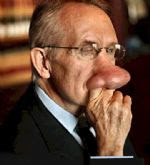 Think what this guy is pulling out.  Maybe a Buick?
Posted by Bushman at 5:30 PM
Email ThisBlogThis!Share to TwitterShare to FacebookShare to Pinterest