Baggy Pants and Self Help Books!

Just a couple things on this dreary Saturday morning and then I'll let you get to your day.
I worked 10 hours overtime yesterday so that's why no post was available.

Read this on Reuters.  Thought it was right on.

LITTLE ROCK, Ark (Reuters) – Arkansas students who love their sagging pants should soon leave them at home.Arkansas Governor Mike Beebe signed a bill on Wednesday that bans students from wearing clothing that exposes "underwear, buttocks or the breast of a female."Arkansas educators have long complained about the drooping attire, such as young men wearing saggy jeans that expose the top of colorful boxer shorts."We feel the bill can improve the learning environment in schools," said Donna Morey, president of the Arkansas Education Association.One concern of the General Assembly was that "student competition over the manner in which clothing is worn could lead to violence and injuries during school hours," according to the legislation. Lawmakers also said that students should learn to dress in a way that is acceptable in the workplace as they prepare to enter it.The new law does not outline how school districts will punish students who wear such clothing."School boards will have to look at existing school dress code policies and make sure they are in compliance with this new law," said Kristen Gould, staff attorney for the Arkansas School Boards Association, a non-profit. "Many of them may well be, and if not, they will have to incorporate it into their current policy and design punishment in accordance."Josh Cunningham, a research analyst at the National Conference of State Legislatures, said that he was unaware of any other state with a ban of baggy pants in schools, although some cities have been successful in enacting such laws.Florida is considering a bill similar to the Arkansas law. In that state, the NAACP has denounced the bill and said it unfairly targets black males.In Arkansas, the bill had little public opposition, although several legislators voted against it.
"Individual expression is important to young people and dress is an especially strong statement of expression, and I don't think legislators should meddle with that," said Sue Madison, a Democratic state senator from Fayetteville, Ark.

My take:  Pull up your damn pants. (that goes for my son as well)  You look like an idiot.  Individual expression my ass.  When every damn kid has his jockeys showing how is that fucking individual.
And leave it to the NAACP to say it targets black males.  If the shoe fits wear it you stupid fucks!!!  It sure isn't all the job resumes in their pockets that pull their pants down.  I just watched a kid (16/17 yrs old) try and walk into the dollar store the other day and he was tripping over his own pants cuz they were down below his ass.    Just thought I would pass this on.  My rant is finished.

Next on the agenda are some Simple thoughts to ponder.  Although they might not be so Simple.

IF MAN EVOLVED FROM MONKEYS AND APES, WHY DO WE STILL HAVE MONKEYS

I WENT TO A BOOKSTORE AND ASKED THE SALESWOMAN, 'WHERE'S THE SELF‑HELP

SECTION?' SHE SAID IF SHE TOLD ME, IT WOULD DEFEAT THE PURPOSE.

WHAT IF THERE WERE NO HYPOTHETICAL QUESTIONS?


WHAT WAS THE BEST THING BEFORE SLICED BREAD? 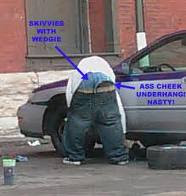 Oh well the cops love it cuz they can't run as fast!!!!
And no I'm not a racist.  I hate everybody the same!!


Posted by Bushman at 11:13 AM
Email ThisBlogThis!Share to TwitterShare to FacebookShare to Pinterest