Sunday Salutations and Peeing on the Neighbors

Salutations my friends and you too!  Ouch that was mean.  Sorry should have left that for the other blog. (snicker)
This morning is well under way now.  It started in the dark recess of our bedroom in the wee hours of the morning with mamma's phone emitting a loud beep to let her know she had a voice mail at 5:30 AM on a Sunday morning.  Well Big Brown Dog and Little Yellow Dog (creative nicknames huh?) were apparently a tad confused on the phone beep and the rooster crowing alarm clock and even though it was dark I could see them look at each other, tilting their heads this way and that discussing whether or not they should get up and the consensus was better safe than sorry, early bird gets the worm, better to ask forgiveness than permission and ultimately I have to go potty won over the debate.  The whining commenced.  Shocked as all get out Mamma rolled over and took the mutts downstairs for food and a potty break.  I think she knew I would be whining myself about the overlooked volume control on the phone/email gadget.
So puppies were fed and I lay there in bed, slightly comfortable.  Well aware that it was early and there was a slim chance on recovering just a wee bit of sleep from this morning's musical entourage.  Not to be left alone the mutts decided as well they had better return to the slobbering state of slumber they call sleep.
Did they really have to pick my legs as a place to do it?  So I kick 'em off the bed.  I swear they were only on the floor for a nanosecond.  They're like a couple of pogo dogs.  BOING!! back up on the bed.
We repeated this several times until I finally gave in. (they knew the whole time) and let them "snuggle" in between mamma and I.  I close my eyes, take a deep breath and........Mrs Beeping Email Alert, next to me, opens up with her snarkle, grunt, raucous snoring debut of the week.  Oh the joys!
By now it's breaking daylight and I'm fully awake.  The dogs pretend to be sleeping but don't move or they will launch their version of bed Twister on you.  Screw it!! I'm up!  Let the day begin.
So we go downstairs and the dogs jump up on the couch and go to sleep.  Hmmm.....little &%$#@

Now here I sit and you have just read all about my first two hours of the day.  Interesting? Yeah didn't think so but I didn't tell you to sit there and read.  Now go get a cup of coffee and come back and I 'll tell you what I did yesterday.

Not much actually.  We went into Lansing and picked up a bunch of new stuff for the new kitchen.  I finally purchased a nice stand mixer.  Boy they don't give those away do they?  That's like half a weeks wages just to make crepes and cupcakes.  Oh well.  I also picked up a new pot and pan set.  This was a Paula Dean ensemble.  If you don't know who Paula Dean is then it's likely your arteries are still in good shape.  She is a famous Southern cook who loves butter, fat and all things "unhealthy".  I put that in marks because it's really how you look at it.  It makes me happy so it's healthy for the mind right?  We also grabbed some new plates and bowls and various other mixing, mashing and serving utensils.
After filibustering with money instead of words we headed off to the big box home improvement store.
And because I paid them and they didn't pay me there name shall remain a secret.
I had to install a overflow protection pipe on the water heater at the new house so I needed some pipe.
(insert joke here) I picked up a 3/4 coupling and a 5' chunk of CPVC.  All I had to do was screw the coupling into the relief valve already on the water heater and glue on the correct length of pipe.  Otherwise they wouldn't finance the house.  We also had to scrape and paint some area of exterior trim but if you read this blog you already know that.  I picked up a new screen door latch as well because the previous owners just let their door swing free in the wind because the latch was broke.  It punctured the aluminum siding and I wasn't having any of that crap.  So for a whopping $8 I changed the handle and now we have a perfectly functioning door.  A couple of the neighbors came out to gawk.  I waved and they returned the gesture.
They look like retirees.  Both houses to the North of me.  They must have seen the activity and teamed up in the one guy's front yard to evaluate the situation.  By teaming up they presented a bigger and much more menacing figure than by standing alone.  This should have made me more cautious and well aware of their territory and their blue hair-em.  (snicker)  It didn't.  Soon I will introduce myself.  I will make it apparent who is now in charge of the area and I will pee on the corner of their garage to prove it.
Nah I'm just kidding I'm gonna pee on the front porch!!! LOL
OK long enough post.  Thanks for stopping by and remember Simple Silly Stunts Save Snails
????????????????????????????????????????????????????????????????????????????????????????????? 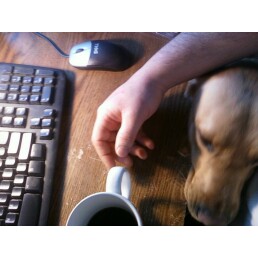 It seems as though I can't even blog alone!
Posted by Bushman at 8:48 AM
Email ThisBlogThis!Share to TwitterShare to FacebookShare to Pinterest