Where do I begin?
I suppose I'll start with how my day went on Friday.  In case you didn't know I work 4 tens and Friday is FO day.  (You can ascertain your own words for my abbreviations)
I didn't want to cut the grass because I just don't care anymore  because it was too wet.  So I laid on the couch and tried to watch Keanno Reeves in The Day The Earth Stood Still.  It wasn't happening.  How threatening is a giant Oscar award anyways?  Or is it an Emmy?
So instead I stared at the wall.  It did nothing.  So I posted on Facebook.  About the wall.  It still hasn't moved.  Then I get an e-mail from Momma about maybe meeting some of her high school friends for drinks later.  I heard drinks, the rest was inconsequential.  So after running around a bit and getting her phone back from Baby Joe Joe (no more sexting) we headed to the infamous Joe's Gizzard City.  The one seen on the Food Network featuring Guy Fierri.  Diners, Drive Ins and Dives.  I've posted about this before.
We sat down and as luck would have it (or fate) beer of the month happened to be Leinenkugels 1888 Bock on tap!  I'm starting to wonder about this whole seasonal thing.  Perhaps my wife is in cahoots with the brewery to keep me sober.  However tonight she is powerless over my desire to swill down a few quarts of the beautiful beer.  Yes they serve it in mason jars.  Of course I had to have some gizzards or as one of the people at the table so eloquently named them "Chicken Ass Cheeks".  No they are not part of the chicken's ass.  The taint? Perhaps.  Not sure. I tried the new Chile Lime flavor with a sweet habenero sauce.  They were good!

Momma's friends arrived precisely 15 minutes after stated arrival time which gave me time for another quart.  (More like a pint I had just finished dinner)
After all the hugs and howyabeens and high pitched willie nillies they all settled in and the fun began.
Momma comes from a small town where everyone knows everybody.  The graduating class was like 65 people.  I often joke with her about having her class reunion at our house (in the living room)

They all had a great time and I managed to scribble down a few notes on some of their stories.  Of course this was many pints and quarts into the evening and justified as I was on trying to take notes (because I knew I would forget) I was using a keno slip and a short wooden pencil that was too cheap to acknowledge that it should have a proper eraser on it.  So when I awoke this morning and withdrew the crumpled keno slip from my jeans pocket (anticipating the greatest stories to ever cross my keyboard) I was slightly taken aback.  Who in the hell got a hold of my "notes" because the crap I was reading didn't make any sense at all.
The funny things you do when drunk!  That's OK because I remember some of it and a couple letters made their way through the jumble of 4 spot game and this play list is not a valid receipt.  Things like Chicken Ass Cheeks.
One particular story was about one of the girls getting drunk and the rest of the group carried her to a pick up truck and laid her out in the bed of the truck and returned to partying.  When the party was over they left and just happened to forget she was back there and decided to do a little drag racing.  Head to head they raced down the road and when they crossed the finish line he slammed on the brakes only to be rewarded with a giant thud from the back of the truck.  A quick glimpse through the back window showed poor drunk girl wadded up in the front of the bed of the pick up.  She ended up getting sick and retched all over the back of the truck and herself so what else you gonna do but take her and the truck up to the quarter car wash and rinse 'em both off.  (you can't make this up people)

Stories like these kept us laughing well into the night.  As with anything the good times must end.  Momma and Baby Joe Joe had to be at the University at 9am this morning so we had to call it quits and head home.  Of course with Momma having plans she stayed sober and drove which allowed me to..........Ps and Qs!

So we had a great time and it was nice to see all the people she grew up with.  I must admit I expected more overalls and straw hats.  Perhaps even a Dale Sr. T shirt and instead Joe's Gizzard City served (what I expect) their first ever Cosmopolitan!  My oh my how fast we grow up!  20 long years have separated these girls and it was nice to see them together again. 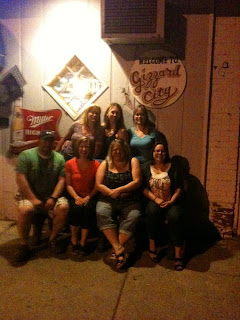 Posted by Bushman at 8:24 AM
Email ThisBlogThis!Share to TwitterShare to FacebookShare to Pinterest