Thirsty Thu..Fri...Saturday and my Top Ten!

Hello there and welcome to Thirsty Thursd...Frida.....Saturday and my Top Ten.  Yes I know it's a little late but hey you know what they say.  I did drink beer on Thursday however it was my lovely daughter's 15th birthday and we celebrated it at the local Mexican restaurant.  Then after that we went back to her Dad and Step Mom's house for cake and presents.  I also had to work Friday so there wasn't much room for computer time.
We had a good time at the restaurant and although it was all Kaitlin's Dad's family it doesn't bother me in the least.  It all kind of seems like one big family almost.  It's nice.  I sampled the fish tacos and gave it a solid 2 on a scale of 1 to ten.  They were not well thought out.  I received two tacos wrapped in aluminum foil that contained a small amount of crumbled fried fish (or cat) and some tomatoes and onions on the side.  Like a whole handful of chopped onions.  Who in the hell is gonna eat a handful of onions on a taco?  No crispy slaw or guacamole puree or anything else that I would presume to accompany a fish taco platter.  Then they gave me a tossed salad which was nothing more than chopped lettuce, cheese and yes you guessed it two handfuls of onions.  Whatever it didn't bother me as much as I make it sound here (drama boy) I was there for Kaitlin's birthday and as I watched her smile ear to ear and her eyes sparkle as she opened her presents and cards I didn't even realize I was eating onions....by the handful!  Of course the staff had to adorn her with one of those giant sombreros and sing her the patented Mexican restaurant birthday song.  To top it off one of the servers picked up the spoon to give her a bite and she actually opened her mouth (sucker) and he plopped it all over her nose.  It was hysterical.  It even went up her nose.  I expected her to turn around and nut punch the little chico but she didn't she just smiled and snorted as she tried desperately to clean whipped cream from her nose and still appear to be lady like! 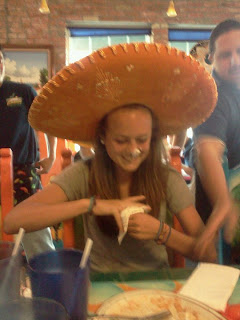 I tell ya I don't know what I'm gonna do when both kids are gone.  I miss them tons right now and it's only been two weeks.  With them staying at their Dad's house full time while were in between houses I don't see them much.  Of course they are teenagers and it's summer break so they are oblivious to most things so I don't worry too much.  Baby Joe Joe was busy Thursday night and missed the party so I picked them both up and took them to lunch on Friday when I got out of work.  We had Chinese! (cat).  Then we went to see the house again because Joe had yet to see it.  I had the combo for the door because the realtor had accidentally forwarded me an email trail that had the combo in it. (shhhhhhh) so we peeked inside and I did see a business card on the counter from the appraiser so that's been done.  Getting very close now!

Ok back to the theme of this post my beer for Thursday was Dos Equis.  Two big mugs!  My favorite Mexican cervecez!  Afterwards it was Busch Light in Kaitlin's Dad's garage.
Stay Thirsty my friends!
Last night my bride and I went out for Italian.  Cuginos in town Grand Ledge has some great Italian food.  I had a couple Newcatle Brown Ales with dinner.  (that is a really good beer as well)
Two days and three different cuisines.  Now I just need a nice French Bistro!

My top ten of the week, good or bad you decide: