Sleep is for dead people!

The man awoke from his deep slumber.  Pried from rest by a noise.  He lay silent, listening.  His back screamed at him to shift positions.  He did and the noise repeated itself.  he blinked his eyes repeatedly trying to make out a shape, any shape in the pitch black of his sleeping quarters.  It was still very early.  Much too early he thought and he began to close his eyes.  Once again the noise echoed in the eerie silence of the morning only this time it seemed to double in strength.
Now his bladder began to ache and with a sigh he rolled over.  Now the noise was clear and non negotiable.  Damn dogs anyways.  "All right mutts lets go", he muttered at them and they ceased their whining.
He headed downstairs and filled their bowls.  While they were eating he stepped outside.  The sky was still lit with a billion stars and frost twinkled in the moon beams that were splayed out across the back yard.  His breath plumed in front of his face.   Soon the dogs joined him.  he could hear them snuffling in the dark.  Probing, searching, investigating whatever had happened during the night.  Their noses told them the story.  He whistled, sharp and shrill it pierced the morning stillness and two figures raced towards him out of the dark.  Happy and wiggling as though they hadn't seen him for days when it had only been two minutes.  He took one last look at the stars and headed inside where a strong cup of coffee awaited and his beloved computer chair.
He was tired.  The month had been long, full of extra work.  His eyes longed to close again but their was no rest in sight.  There was still a mountain of work to do.
Maybe he was just getting too old and worn out to keep up this pace.  He wondered if he should just quit it all and sit on the couch and watch football like regular guys do.  The idea held a bit of intrigue but by the time he finished the thought he was already bored of it.  He realized then and there that he would die an old crippled man who most likely would build his own coffin.  So be it he thought.  Coffins are too expensive anyways!

Hey folks I hope you are enjoying your autumn.  I have been rather busy as of late.
Still getting the house ready for winter, fighting the furnace, stacking wood, cleaning up the never ending leaves from the lawn, cleaning the garage and shed, organizing, sorting.
We bought our 16 year old daughter Kaitlin a car.  It needed a few things done to make it nice.  A new hood, fender, struts, total front brake job, oil and filter, air filter and a paint job.
Everything is complete except the paint job.  Work is pretty slammed right now so getting it in the paint booth may take awhile.  I'll get it there eventually.
I also got the garden all cleaned out and tilled in.  Sort of.  I have a spring rake that I pull behind my tractor that scratches up the dirt pretty good.  Not a total rototill but close.

I have been slowly getting things together for deer camp.  That will begin to escalate in the next few days as we only have about 13 days till departure.  Holy cow where did the time go.

I am also doing some side work in trade for hunting rights on some property here in my area.  I don't have money to lease it but I have a strong back that can work it off.  So in a few hours I will be cutting, splitting and stacking wood.
The smoker is all set for this years venison if I could ever get my hands on any.  The new burner works great.  I have access to all temperatures and they hold steady.  I did a couple slabs of baby back ribs the other weekend and they were awesome.  Bring on the jerky and sausage.
I hauled all the scrap from the old camper and parts from the car to the scrap yard yesterday and walked away with $22.
I also made up this years crapper for deer camp.  Every year we build a new one, only keeping the toilet seat.  the first year the seat was made out of duct tape 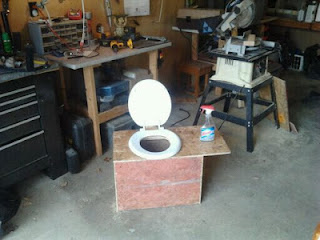 I added a shelf to the side of it this year to hold paper, lantern and whatnots.
I have to open the camper back up, put the screened-in room back on and get all the tarps attached to it.  A few other odds and ends and then it's just packing and grocery shopping.  I still haven't made my menu yet.  Ugh!
Well I better get to work.  See you folks later.  I will be computerless for awhile but I'll be back eventually.
-Bushman

Posted by Bushman at 8:10 AM
Email ThisBlogThis!Share to TwitterShare to FacebookShare to Pinterest