The evening drew near.  Shadows grew ever long and shapes began to appear, began to shift.  Dark objects, standing, crouching, sliding and vanishing.  Leaves that still clung desperately to the craggy, old oak rustled and shivers began to creep.  The lone fern danced in the growing breeze.  Swaying rhythmically as if song played unheard by all except the lonely.
The White Pine breathed in the night air and as its boughs rose and fell with each breath the emerging moon cast a glow between each of its five slender needles.  Painting, illuminating, decorating.
Stars appeared, switched on in an instant.  Making a grand entrance to the stage.
The last birds called goodnight and for a few short, precious minutes the world became silent.
Then like a gunshot piercing the night a footstep crunched in the leaves under the old oak.
The shivers returned.  The leaves crunched ever so loud in the eerie silence.
They made their way towards the pine and then, on cue, the moon cast a beam upon the noise maker.
As quick as it began the show was over.  I made my way back to camp.  Thankful for performance.


29 more days until we depart for deer camp.  I can't wait.  I have been preparing a few things.  I still have a few to do but the anticipation is more than I can bear.
My fall project list is getting a little shorter.  I have almost finished the cleansing of the summer garden.  Removing all of the vegetable plants that were killed off by the last two frosts.  Pulling all the corn stalks, removing all of the planting boxes.  Then I hooked up the spring rake to the tractor and basically tilled everything in.
I have a big supply of firewood stacked in the garage to keep it dry over the winter.
I have been keeping the leaves cleaned off the yard every weekend.
I do need to brush the chimney again, winterize the outdoor faucets, clean up the shed and winterize all the lawn mowers and such.
Time to drag out the free snow blower I got last year and get that running so I don't have to use the tractor to do the driveway this year.  It works good but the tractor and the snow blower attachment take up a lot of room in the garage.  The little walk behind snow blower will be better.
I have a few trees to get cut up and a bunch of wood to split that has been piled up all summer.  mostly campfire wood as it is all Chinese elm that I cut from my fence row.
So far I have not lit the furnace and aim to keep it that way as long as possible although Momma has different ideas.  I do need to light it and clean it so it is ready when we do need it but for now the fireplace is doing an adequate job by itself.  I never did get the wood stove I wanted installed.  I looked all over the place and just couldn't find a $1000 bill lying around so I guess we just keep on looking and using the fireplace.
I used my pop up trailer to haul firewood into the garage.  It holds quite a bit of wood.  I have two full loads int he garage right now stacked up against the wall. 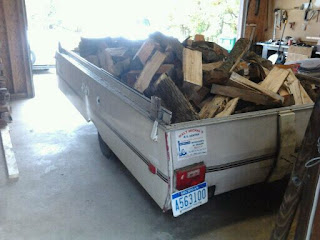 I can't believe it is almost the middle of October.    The view from my back porch.
The sun came out for just a couple minutes that day and lit the tops of these trees on fire. 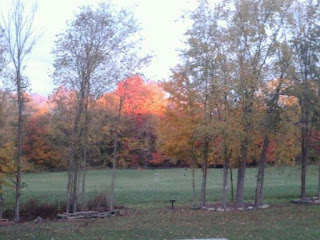 Be well my friends,
-Bushman
Posted by Bushman at 7:26 AM
Email ThisBlogThis!Share to TwitterShare to FacebookShare to Pinterest