Bushman smokes Christmas Lights? Did I read that right?

Sunday Salutations to all!
Yesterday was a fun day for me.  It started Friday night actually by prepping to make venison snack sticks.  I worked OT on Friday and when I came home I pulled out all the "toys" and got to work quickly.  You have to stuff the sticks and let them rest overnight before smoking them.
This particular batch was part of my share a deer program that I started his year.  The program was simple.  You bring me a whole deer and I will skin, process ad make you sausage, snack sticks, cut it into steaks or grind into burger.  No cash charge.  I keep half of the meat.  That is your cost.
So this guy wanted all snack sticks for his half.  I ended up with 42 pounds of clean venison off of this deer so he got a 20 pound batch of sticks.  My cost was about $20 with seasonings, casings and pork add in.  So in essence if you don't figure in my time to butcher and smoke I paid $1 a pound for nice pure venison.  There is always room in the freezer for more.  Much better than paying $4 a pound for that crappy burger they sell in the store.  Plus if I want to make sausage or jerky I can do it with that meat.
So anyways here is my set up for snack sticks. 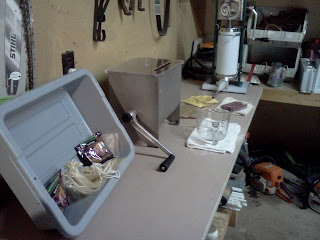 I have my meat lugs for holding the product.  Much better than using momma's kitchen bowls.  Inside the lug are various seasonings, casings and string to tie off the tubes.  Then I have my meat mixer which is a very useful tool when mixing 20 lbs. of meat at a time.  My stuffer is clamped at the end of my work table.  Yes I do this in my garage but I assure you the table is sanitized before each use and normally I do not fire up the chainsaws during the stuffing process.  (There is a lot of beer in the fridge though)
I try to stuff the casings in lengths that are a multiple of 2 feet.  I have enough room in the smoker to hang a 2 foot length of stick before it touches the diffuser plate.  So when stuffing I have a mark on the table at 4 foot.  I crank the handle on the stuffer and when the stuffed casing reaches the mark I turn it around so it heads back towards me.  Once it reaches the stuffing machine I turn it around and head it back the other way to the 4 foot mark and so on.  My longest stick has been 16 foot long.
There are the occasional goofy ones.  Burst casing and such but mostly I get long runs like you see here. 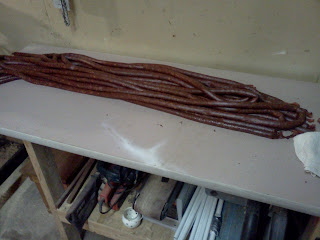 That was how I finished up on Friday.  It takes longer to wash everything up than it does to stuff it.
This rests overnight to allow the cure and the seasoning to settle into the meat.
The next morning I preheat the smoker and bring the sticks int the house to allow them to warm up to room temp gradually.  Then I load them in the smoker. 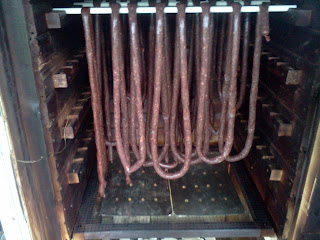 The plates you see in the bottom of the smoker are my diffuser plates.  Stainless steel with holes in them.  What this does is keeps the sticks from the direct heat of the burner element below them but still allows the smoke and heat to filtrate through.
Here is a shot of under the diffuser plates.  I re-purposed the stove from my old pop up camper.  It works great.  I can use one burner or all three.  One burner on low and I can hold temps as low as 125-130 degrees.  Turn one burner on high and it will hold around 180-190.  Of course with all three going on high I can soar over 300 and eventually burn the whole thing down.  LOL  The higher temps are nice for chicken and ribs and such.  I like it low and slow for sausages and jerky. 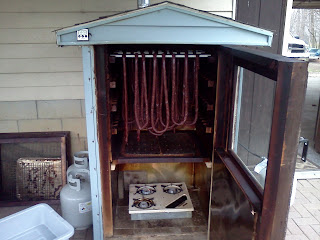 I have catch plates that will cover the diffuser plates as well.  These are just disposable tin serving trays you can buy at the grocery store.  When you initially start the cooking/smoking process the meat can and will, drip some.  There is moisture and fat content in them.  I don't want this all over my burners or diffuser plates so I use the catch plates for the first hour or two depending on what I'm smoking.  "Won't that block the smoke?" you ask.  It would if the smoke box was going but on start up I like to get the meat to at least 90 degrees internal temp before adding smoke.  There needs to be an initial drying time for the meat when it first goes into the smoker.  Smoke does not stick to a wet product.  It does no good to start smoking immediately.  Once the meat has reached the magic temp then I will add the smoke and pull the catch plates
I built a custom smoker box for my wood chips.  I took 1/4 steel plates and welded a rectangular box that is 6 inches long and 3 inches wide.  I attached a lid using small hinges.  The lid is also 1/4" steel.  In the lid I drilled holes to allow the smoke to come out but limiting the amount of air intake so it doesn't light on fire.  It will smoke for about 90 minutes.  Then I just pull it out, dump and refill it.

I use a two thermometer system for the smoker.  One probe I insert into the meat in the middle of the smoker and the other hangs loose on the inside for overall smoker temperature. 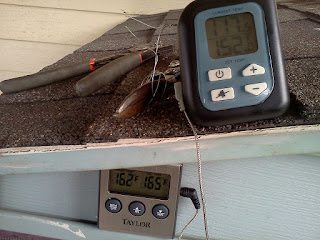 The upper one is for the meat and you can see in this pic that the internal temp of the meat is at 117 and the alarm is set at 152.  Once the internal temp reaches 152 I shut down the burners and let it rest.  The meat will continue to raise a few more degrees in temp.  Reaching the all important goal of 160.  This is where all the nasties die if there should be any present in the meat.  Don't want anyone getting sick.  The lower is for internal temps of the entire smoke box.  It is currently at 162 and the alarm will go off at 165.  This lets me know if I need to open or close the damper or restrict air flow on the air intake port at the bottom of the smoker.
Temps vary quite a bit while smoking.  It varies by product as well.  I start at 130 for sausage and every hour or two crank up the heat.  Finishing around the 180 mark for the last few minutes.
This particular batch took between 6 and 7 hours.  The guy came and picked it up right after it was done and barely cool.  I would normally cool it and cut it into sticks but with this program you get the whole shebang dumped in your lap.  You cut and freeze or wrap or whatever you want to do with it.
I enjoy it.  The more I do the better I get at it.  Today I get to smoke 10 sticks of Trail Bologna.
Trail Bologna is like summer sausage except it has a more robust flavor and added spices like extra peppercorns for some kick.  I like it hands down over summer sausage.  This batch is for me to enjoy. 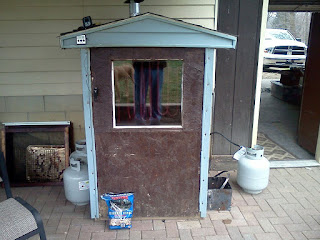 So while the smoking process was going on I had time to get all my Christmas lights on the house.  Enjoyed a bunch of beers and a nice cigar while doing it.  I made sure I was off the roof before indulging in the festivities.  LOL 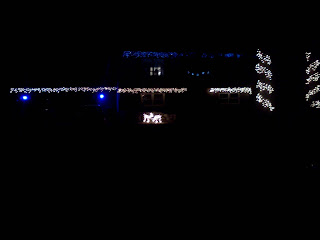 My beautiful step daughter had her junior senior banquet last night and I must say she was stunning.  I can't believe how fast she turned into an adultee.  She is gonna kill the boys. 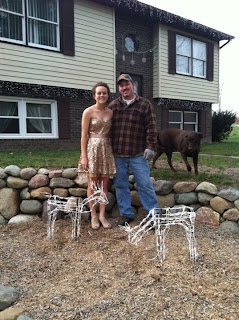 I suppose I have bored you enough but I thought it was time to change the pace of the blog for a bit. Happier times are ahead! Go Me!

Posted by Bushman at 9:28 AM
Email ThisBlogThis!Share to TwitterShare to FacebookShare to Pinterest