Bushman Gets a Felonious Lawn Job!

Perched upon the ancient throne the king rested his face in his hands.

He was a little tired as it had been a long day and the work was not yet finished.
A grunt escaped his pursed lips.  He concentrated on the task at hand.

The door to the throne room burst open, it was apparent that he had not closed it all the way or the latch was getting sticky again, he made a mental note to check it as two dogs burst through the door.  Tails wagging and butts wiggling they made their way through the already cramped throne room.

A wet nose nuzzled his hand.  Someone wanted to play.  The king shook his head, he couldn't get any peace and quiet around here and now the throne room was wide open to the hallway and the front entrance.

It was at that precise moment when the wet nose touched his hand that all hell broke loose.  The once docile mutts turned into rampant, hostile mutant creatures and raced from the throne room as if they had been scalded with boiling water.  Their barks were alarming and the hair on their back was standing up.

With their tumultuous exit from the room, the door banged completely open and he looked upon the dogs with interest as they bolted down the stairs.  They stopped short of the front door, continuing their barking.  The doorbell rang and then a face, out of nowhere, peered through the front window.  His hands cupped around his cheeks to shadow out the reflecting sunshine off the glass and make the inside visible.

He stared straight at me...and my throne.

In the next instant he vanished and I rose from my throne and pulled up my pants and headed out of the bathroom and down the stairs, trying to zip and buckle at the same time.

Beating the dogs back from the door, I was able to get it open partially, no thanks to the darn rug jammed under the door.

The man was walking back towards the driveway, his arms out, palms up in a questioning manner.
In my driveway sat a little red car, which I presumed was his, and past that sat a county sheriff patrol car with lights on and flashing.

I watched for a moment before forcing myself out between the jammed door and the edge of the door frame, making another mental note to burn that damn rug.

I stepped out onto the front porch just as the peeping Tom made his way to the patrol car.

I caught a few sentences of their conversation.

"Do you live here," questioned one of the two officers.  She was a short and seemingly well-muscled woman with sleeves of tattoos covering her arms.  At first I wasn't sure of her gender but after a moment I could tell by her voice.

"What was your purpose for stopping here," she asked.

He hesitated for a split second and with a slight turn off his head he noticed the cap off of my truck setting down the hill on the other side of the driveway.  (Which I might add is not visible from the direction he was coming)

"I just stopped to see if he was selling that truck cap," he answered, pointing to my truck cap which was well away from the road and did not portray and inclination of being for sale nor did it have any for sale signs on it.

The other officer took a step forward.  He was a taller gentleman with broad shoulders, brown hair and solid square shoulders.  The protective vest he wore made him appear even larger than he actually was and he was impressionable at the very least.

"I clocked you coming over the hill at 80 plus miles per hour," he told "Tom".

"Tom" took a step towards the officers and their conversation quieted some and I was only able to make out a few bits and pieces, but I caught the gist of it.

The few bits and pieces were as such:

I don't believe you.
I think you were trying to get away from us.
Do you have any warrants?
Why did you mess up this guys lawn if you were just stopping to look at that cap?

The questioning went on for awhile and soon "Tom" was led into the back of the patrol car while the officers searched his vehicle.  I went back into the house and watched from the upstairs window.
They searched for quite some time, removing objects from his car and placing them on the roof.

When they had enough 'collectibles" on the roof they came to the door to inform me that "Tom" was a felon out on parole and they had clocked him going over 80MPH and when they lit him up he tried to pull in my driveway to either hide or pretend he was home or something unbelievable like that.

Turns out that little red cars can not take a turn at 65 MPH into a gravel driveway without sliding through my lawn like a Nascar spinout on the grass at the Daytona 500.  The grass at the end of the driveway was peeled up like an ice cream scoop through soft ice cream.

The felonious "Tom" was being arrested for a parole violation and a tow truck would soon be on its way to recover the little red vehicle.

"Would you like to press charges for property damage?" they asked me.

"Well, seeings as the guy knows where I live and that would mean even more trouble for him and I don't need any kind of retaliation from him I think not."

They shook their heads and stepped down from the porch, returning to their squad car to await the arrival of the tow truck.

In the meantime, my wife came home from work right in the middle of it and was forced to drive through the front yard because "Tom" and the cops had the driveway taken up.  Then the cops decided they would move their car onto the lawn so the tow truck would have access to the car.

So "Tom" went to jail.
My lawn took a beating.
My throne break was witnessed by a peeper ( I never did make it back in there)
I had a little excitement for the evening. 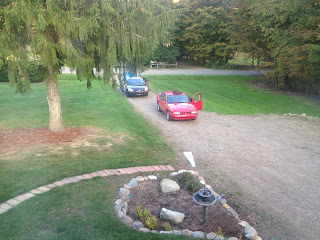 I have decided to delay the post I had promised this week until next week.
Sorry but stay tuned, it's worth it.

Posted by Bushman at 7:58 AM
Email ThisBlogThis!Share to TwitterShare to FacebookShare to Pinterest