Who wants a moustache sno-cone?

I think I just might have an idea for a new story.  I haven't had many creative sparks lately but yesterday as I came in for lunch I browsed through Facebook and read an article that someone shared that kind of sparked my curiosity.
I might just play around with it.

But first things first!
I brought home that snowmobile that I mentioned in this post and have been riding it around quite a bit.  It has been fun but it wasn't as much fun as I thought it would be.  Then the other day after I used it to haul branches from the ice storm it quit and I could not get it to run again.
I tried several things without much success.  Finally after much internet researching and tearing the carburetor down and cleaning it twice I discovered a hole in the primer bulb in the fuel line and I also learned that the adjustment needles on the carb were way out of whack.  Also the gap on the spark plug was off.  The guy at the parts store told me it should be 0.28 when it fact it should have been 0.20.
So I re-set all the carb needles, fixed the plug gap, new primer bulb, fresh fuel and BINGO!
Now I have to tell you, before the sled was a little bit doggish.  It didn't like going through the snowdrifts or plow piles.  It smoked a lot and overall acted like it was 70 years old instead of 40.
"Well stupid", I said to myself, "that's because the whole fuel/air/ignition system was out of tune.

Now it runs like a champ!  Those snow drifts?  Yeah they are a lot funner now!  I also went from a top speed of about 35 mph to about 45 mph.  What a huge difference it made.  I also leaned up my oil to fuel mixture.  I was running about 32:1 fuel to oil and now I'm running 40:1.  A lot less smoke coming out of the exhaust.  Now I don't smell like a weed whip after I ride.

So now I sit here pecking away and I really should be getting ready for the day.  However, I am procrastinating a bit because, one it's still dark outside and two....... 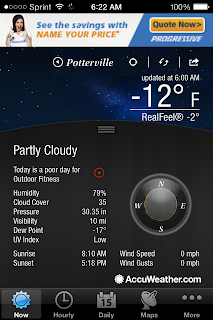 It's cold  outside!!!!!!!!!!!!!
Not sure about the whole real feel temp.  If it is negative 12 degrees then how can it feel like only negative 2?
I went outside to take care of the chickens and the ducks this morning around 6 and my nose was freezing up and within a minute I had a moustacheicicle.
I brought their water jug inside last night.  I knew my heater system wouldn't hold up.
Yesterday I added another string of Christmas lights to the inside of the tin.  Trying to raise the temps a bit but it can't compete with -12.

Today I am going out to cut some more wood and this time I am taking my snowmobile with me.  My friend has a lot more room to ride and I have thrashed my one acre.
It might be cold but it's never too cold to have a little fun!

Hopefully that plays and I don't know why it's sideways????
Posted by Bushman at 7:06 AM
Email ThisBlogThis!Share to TwitterShare to FacebookShare to Pinterest